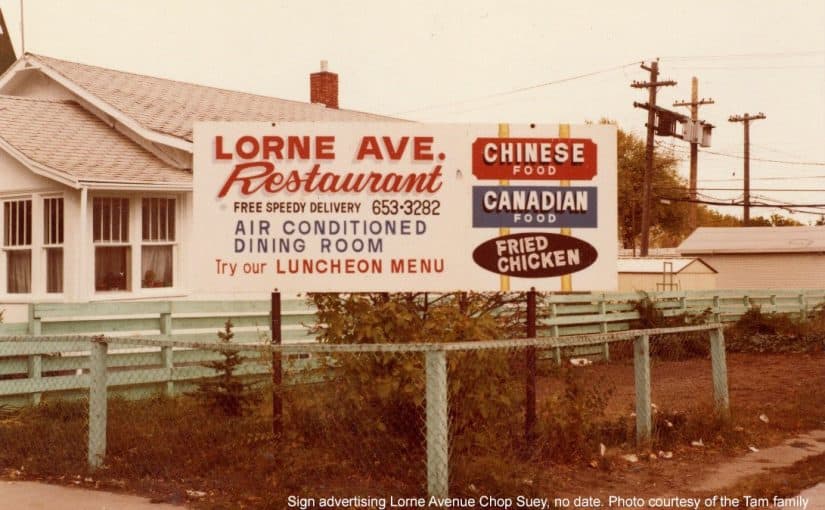 This post is our second feature on Chinese history in Saskatchewan. This post is highlighting Tom Yee (Kock Hin Tam) and his iconic Saskatoon restaurant, Lorne Avenue Chop Suey.

Tom Yee was born Kock Hin Tam. He adopted the name Tom Yee upon his arrival in Canada and legally changed his name in 1971. The photo below shows Tom Yee doing Tai Chi in 1979, courtesy of the Tam family. Click to enlarge. 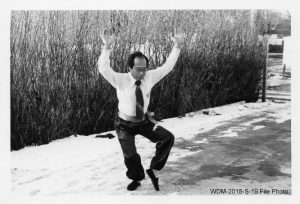 Tom Yee opened Lorne Avenue Chop Suey on the northeast corner of Taylor Street and Lorne Avenue in 1968. The restaurant served both Western and Chinese style food. They were especially well known for their TJ Tasty Fried Chicken and their homemade egg rolls. The fried chicken was breaded and seasoned with a mix of herbs and spices and sold in buckets. The egg rolls were made with crepe-thin wrappers of egg and filled with chopped vegetables and a special sauce, then dipped in batter and deep fried. Tom Yee’s daughter describes the food served at the restaurant as “Canadianized Chinese food” as well as Western-style food like fish and chips, hamburgers and steak.

The restaurant was located in the Exhibition neighbourhood of Saskatoon, across the river from Saskatoon’s historic Chinatown in Riversdale. The restaurant served mostly people who lived or worked nearby. Sunday lunches at the restaurant were especially busy as congregants from the surrounding churches would often stop by for an after-church meal. The busiest day of the year, though, was Mother’s Day. The restaurant would be packed with families celebrating every year.

During the annual Exhibition, which was held just a few blocks away, carnival workers would come to eat when they grew tired of fair food. When horse racing was on at Marquis Downs, jockeys and trainers would frequent the restaurant as well. The restaurant would also sell food at a Chinese cultural booth every year at the Exhibition to raise funds for the Chinese Folk Art Society.

The Chinese Folk Art Society was an organization dedicated to preserving Chinese culture in Canada. Tom Yee served as president for many years and was a teacher of Chinese lion dance. The lion dance is done at Chinese cultural events such as Chinese New Year to bring good luck and scare off evil spirits. It is done with two people, one acting as the front legs and head and the other acting as the rear legs. The lion is guided by a “teaser” who wears a mask and tunic. The teaser uses a fan to “tease” the lion and coax it into performing specific dance moves while also guiding it safely through the streets.

Chinese celebrations and events in Saskatoon usually started in Riversdale, but after finishing there, performers would travel to Chinese-owned businesses in other parts of Saskatoon such as Lorne Avenue Chop Suey.

Lorne Avenue Chop Suey was a landmark the southeast part of Saskatoon. It was sold to a new owner in the early 1990s, and a few years later in 2000 it burned down in an overnight fire. No one was injured but the restaurant was never rebuilt.

Although Lorne Avenue Chop Suey has been gone for many years now, it is remembered fondly among those who frequented it and the Exhibition and Buena Vista communities. It was a landmark in Saskatoon’s east side for almost 30 years. The WDM recently acquired the artifacts featured here to help preserve and tell the Tam family’s story.