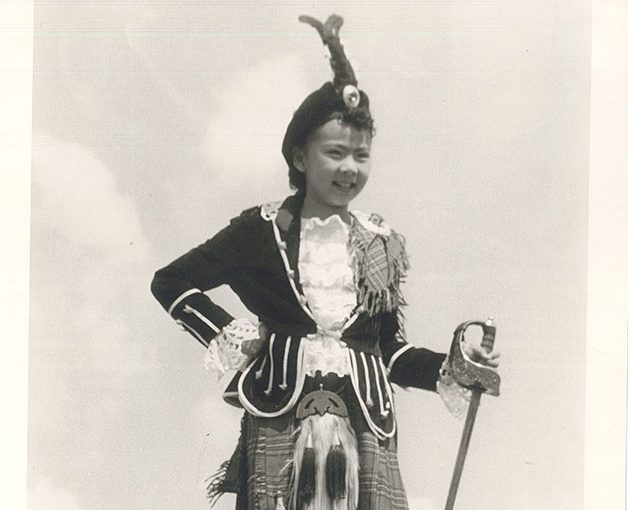 This is our third post in our series on Chinese history in Saskatchewan. This time we are featuring Betty Klepp (née Chan), a prolific highland dancer from Saskatoon.

Elizabeth Elaine “Betty” Klepp (nee Chan) was born in Saskatoon in 1945 to Ernie and Rose Chan. As a child she took tap, jazz and ballet dance classes in Saskatoon. When she would arrive early for her classes, she would watch the Scottish highland dance classes that took place before hers. While watching, she would practice the highland dance moves. Her teacher noticed she showed great skill and invited her to join the class. This was the beginning of Betty’s award-winning highland dance career, competing across Canada. She danced for Queen Elizabeth II during her 1959 visit to Canada and at the 1967 Canadian Centennial celebrations on Parliament Hill.

Betty began teaching highland dance in her teens and continued for over 45 years. In addition to this, she worked as a teacher in Saskatoon Public Schools for many years until retiring in 1993, when she moved to Vernon British Columbia with her husband, Don Klepp.

Her skill at highland dance and her unique story drew the attention of the CBC. They produced a documentary about her, which in turn caught the attention of a plaid designer from Ontario in 1957. Because Betty had no Scottish family tartan to wear, Fromm Bros. Ltd. designed and wove a pattern for Betty, calling it the “McChan plaid.” It could not be registered as an official tartan as a family or clan tartan can only be registered for a family or clan recognized by the Court of Lord Lyon in Scotland. Since there is no recognized Chan clan, it was a plaid rather than an official tartan. Betty was given a bolt of fabric featuring the plaid and had kilts made from the fabric. The colours of the plaid: blue, green, red, and yellow, each hold symbolic meaning relating to Chinese history and culture. The blue was chosen because the Chinese were the first to develop blue dyes, the green to represent jade, which is valued in Chinese culture, the yellow because of the significance of gold in Chinese religious practice, and the red because of its association with luck, happiness, and success.

Along with the skirt, a fitted velvet jacket to be worn at dance competitions was donated, along with two highland dance swords. One is an antique Royal Marine Light Infantry sword from 1897-1901 and the other is of unknown origin but belonged to Betty in the 1950s. Swords like these would be used for Scottish sword dances. In a sword dance (also known as “Ghillie Callum”), two swords are placed on the ground in a cross or x shape and a dancer dances in the open spaces between the swords.

Betty Chan crossed cultural boundaries to become a well-recognized and highland dancer. She helped her community as both a dance teacher and as a remedial reading consultant. In addition to highland dancing, she practiced Tai Chi and was an avid player of Mahjong. She enjoyed skiing but her knees were injured from her years of dancing and she eventually had to stop. Betty passed away in 2018, but her contributions to Saskatoon and Canada are remembered by many.