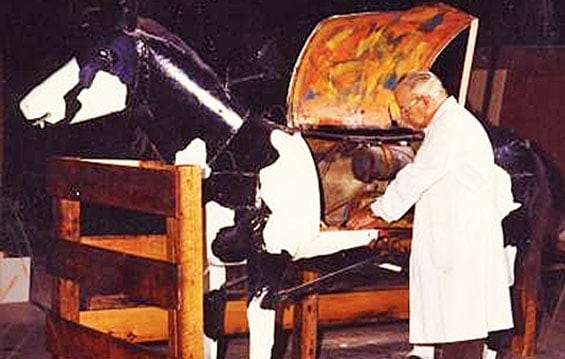 Blowtorch (WDM-1979-S-260), a life size mechanical horse, was the pet project and creation of W.J. McIntyre, a Swift Current, Saskatchewan inventor. Described by former employees as “rather eccentric with a keen, creative mind,” McIntyre built his first mechanical horse in about 1947. Over the next five years, he made design improvements, perfecting the horse’s look and mechanics. Blowtorch III, his third horse, was his best and last.

Blowtorch’s body was fashioned from sheet metal. A nine hp gasoline engine provided the “horsepower.” Small wheels were hidden under his hooves. The legs slid back and forth. A foot throttle controlled the speed; a brake cable slowed it down. A coat of black and white paint and a horsehair mane and tail completed his “horsey” look.

After McIntyre’s death in 1965, Blowtorch was put out to pasture. Neglected and almost forgotten, the elements took their toll. Rust began to eat away at his shiny coat. The bearings in his mechanical body seized up. That’s when Allan Jacobs, a welder at McIntyre’s shop, spotted the tired horse and decided to do something about it. Along with McIntyre’s son Jim, he decided to bring Blowtorch out of retirement, restoring him to his former glory.

Over a decade later, Jim McIntyre donated his father’s favourite horse to the Western Development Museum. Treated to a “tune up” both inside and out, Blowtorch found a safe home at the WDM Moose Jaw. In 1986, he made the trip by rail to Vancouver where he was stabled in the Saskatchewan pavilion at Expo 86.

W.J. McIntyre was also a practical inventor. In addition to his rather fanciful horse, McIntyre invented many things for use around the farm. Some were patented; others were not. His foundry and machine shop turned out land packers, windchargers, seed treaters, grain loaders, animal dehorners, swath turners and tractor cabs.

In the late 1950s, McIntyre organized the Inventors’ Association to encourage inventors like himself who had experienced difficulty in patenting his ideas and promoting them to likely buyers. By 1958, the Association had over a thousand members scattered across Canada and the United States.

Blowtorch is currently featured at the WDM Moose Jaw.