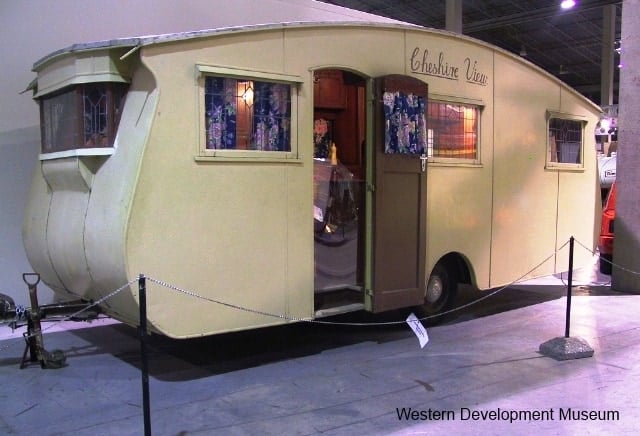 This unique-looking camper was built in Manchester, England, between 1946 and 1948 from materials salvaged from bombed buildings during the Second World War. Constructed by brothers Norman and Victor Thane, it was based off an earlier model the brothers had built immediately following the war. The exterior of the trailer is made of aluminum sheets covering a wood frame, with painted canvas covering the roof. The interior is made primarily of wood left from abandoned bombed out buildings from the brothers’ neighbourhood.

The Thane family brought the trailer with them to Canada in 1952. They loaded it up with all their belongings and shipped it to Lachine, Quebec. They pulled the trailer from Quebec, through the northern United States to Medicine Hat, Alberta where they settled. Eventually, they relocated the trailer to Vancouver and then Shuswap Lake, BC. In 1979, son David brought the trailer to Saskatchewan where it was used for vacations at Waskesiu for a couple of years. Eventually the family stopped using it as it was both difficult to transport and impractical due to the curiosity it invoked in neighbours, who would constantly stop by to ask questions.

It is now on display in the WDM Moose Jaw.