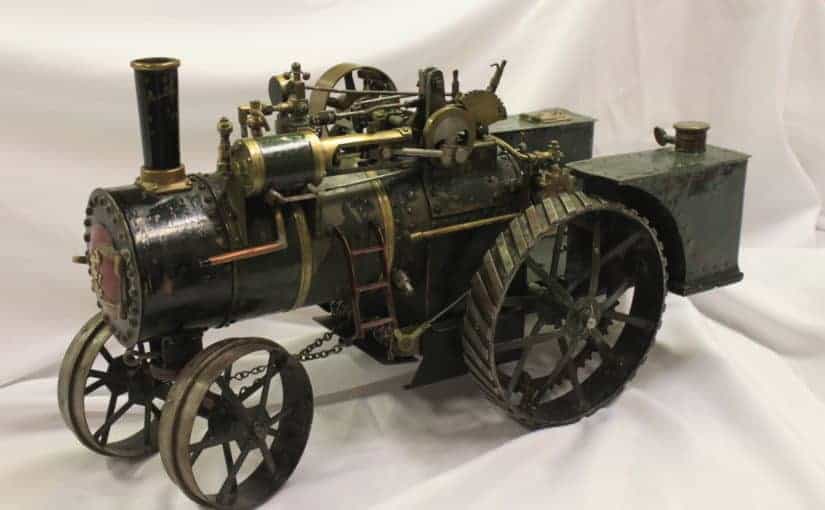 A model steam engine (WDM-1997-S-295.2.a.b) in the WDM collection is the work of Fred Dalby. The engine “came home” in 1997. Dalby was born in England in 1864. As a 12-year old, he left home for London to apprentice as a blacksmith. When he was 17, Fred decided to join his older sister and her family who were heading for Saskatoon with the Barr colonists. He got odd jobs as a labourer in Saskatoon and worked for a time on the Arelee homestead of his sister and brother-in-law. A few years later he returned to England to marry his childhood sweetheart Emma.

Fred and Emma returned to Saskatchewan with the idea of taking up a homestead. They arrived at Kinley, Saskatchewan in the dead of winter. Emma was accustomed to better circumstances and she was very unhappy in the crude shack on the farm. Fred and Emma decided to move to Saskatoon.

Fred Dalby loved to tinker. He was skilled at making things, including clothing for his family. Money was scarce and family holidays were out of the question. So, Fred spent his spare time building a model steam engine. For two years, from about 1915 to 1917, he worked on his model, salvaging parts from an old adding machine and cutting the gears by hand. A few pieces were ordered from England. Fred had no blueprints. “I just made the engine up out of my head,” he recalled years later.

The finished model was fully operational. A local boiler inspector was so impressed with it that he used the model to illustrate his lectures. The model was treasured by its maker and later by his family.

In 1997, Fred Dalby Jr. of Don Mills, Ontario contacted the WDM about donating his father’s engine. On a visit to the WDM a year earlier, he had seen another model engine on exhibit and began to think about returning the engine to Saskatchewan. The WDM was delighted with the offer. What made it even more special was an album which accompanied the donation. The album, with photographs and text in the maker’s own words, told the story of building the engine. Fred Jr. had made sure that his father’s story would be preserved for future generations.