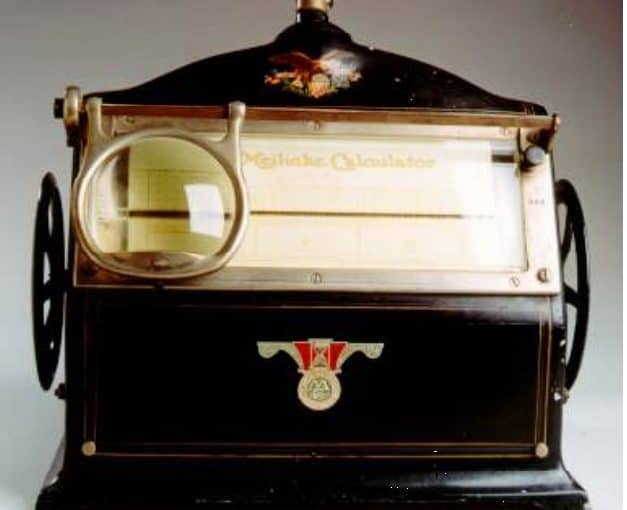 Carl Meilicke felt that no math problem needed to be solved twice, so in 1896 he invented a calculator to prove his point.

Meilicke was born in Wyndham, Minnesota in 1881, and moved with his family to Dundurn, Saskatchewan when he was 14. The Meilicke family later moved to Hanley and Carl ran a lumber yard with his brothers. It was while working there that Meilicke began experimenting with tables of calculations for pricing the different lengths of wood. The first Meilicke calculator was produced in Dundurn on a tomato can. The idea took him to Chicago, Illinois where he founded Meilicke Systems Incorporated.

“Carl found it useful when he sold cords of wood, to make tables to look up the price of certain lengths,” said his grandson Ronald, a retired computer programmer from Wisconsin. He worked for his grandfather and eventually became president of the company in Chicago.

The Meilicke calculator looked nothing like the electronic hand-held ones used today or the calculator on your smartphone. Each calculator was designed to solve one specific type of problem, and the machine was not capable of doing its own computing. Carl Meilicke performed all the calculations for a specific problem. Then he transferred that information onto a series of tables that became the calculator. The earliest calculators were made on metal drums that could be rotated. Later versions resembled a notebook with tabs on the top. Finding the solution to a problem was accomplished by matching information on the tab with the right place on the table.

After a few years, Meilicke took his calculators to Chicago where he quickly found buyers. His first contract was to build interest rate tables for large banks in the United States, but his business soon expanded. He built calculators for personal income taxes and payroll charts for companies like Sears Roebuck. He started a factory in 1915 near Wrigley Field in Chicago, and at times had a staff of 30 or 40 people.

“It sounds really crazy now, but people used to calculate payroll on charts and tables,” said Ronald Meilicke. “You’d look at the rate of pay on top, turn that tab and look down the chart opposite.” For a specific number of hours, the calculator listed the regular wage, overtime wage, taxes and net pay of an employee.

“Every time the US government changed the tax rate, it was a bonanza,” said Ronald Meilicke. “For a few decades that seemed to be happening every two years.”

Meilicke said he inherited his interest in mathematics from Carl. “My father and my grandfather were always working on numbers and charts.”

When Ronald joined the United States Air Force in 1956, his background in math earned him a position working the UNIVAC, the world’s first commercial computer.

“They said, ‘We’re going to send you out to California and you’re going to learn about these electronic gadgets called computers’,” he laughed.

After his grandfather’s death in 1963, Ronald returned to help his father run the calculator business. They began to use electronic computers to calculate the information on the tablets, which would then be printed out and sent to an offset press. By the 1970s, however, businesses were doing calculations on their own computers and did not need Meilicke calculators.

“The business felt the pressure of the computer industry,” said Melicke. “But we sold cordage calculators until the last day that business was running, the same calculators that old Carl had invented in Hanley.”

Meilicke, who has written a book on the history of computers, said his grandfather was one of hundreds of technical pioneers who helped develop the computer industry around the world.

“You can see the advance in technology from my grandfather, to my father, to me,” he said.

And it all began with a tomato can in Saskatchewan.

The Meilicke Calculator (WDM-1979-S-123) is on display in the Bank of Nova Scotia on Boomtown Street at the WDM Saskatoon.

Click on the patent number below to view more information about Meilicke’s first patent on the Canadian Patent Office Patents Database.

You can look up more patents filed by Meilicke in our Saskatchewan Patent Database. (Joan – this our WDM link, it works right now).