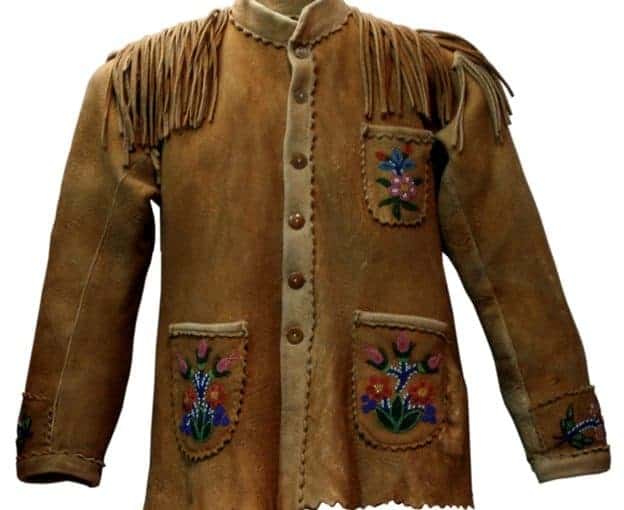 For nearly two centuries, the Métis have been known for their flowing floral beadwork and unique buckskin coat designs. Starting in the early 1800s, Métis women began adapting the embroidery they learned from Catholic missionaries with the traditional embroidery and quill-work techniques they learned from their mothers and grandmothers. Using traded beads instead of porcupine quills, Métis women developed a unique style of floral beading. Almost all clothing worn by the Métis people bore beautiful beading. Even dolls would wear beaded clothing.

Beading not only allowed expression of Métis culture, it also allowed women to participate in the economy. They would sell or trade beaded goods to both Europeans and First Nations. When times were tough, sometimes the only income a Métis family would have would be from the sale or trade of a woman’s beaded work.

Leather was favoured by the Métis over the cloth that Europeans used, as it was more durable and water resistant, making it more appropriate for life on the prairies. Most jackets like these would be made of caribou, moose, or bison skin and they tended to be decorated in places where wear would not destroy the beadwork (such as pockets, cuffs, and shoulders). The addition of fringes along the jacket were also common in Métis craftwork.

This boy’s beaded jacket (WDM-1981-S-205) reflects the beautiful Métis tradition of floral beadwork, as visible in the wild rose pattern on the pockets. It was a gift to Leroy Massingill by his father in about 1915 and was worn in the Maple Creek and Leader areas of Saskatchewan. Over one hundred years later, this jacket can be seen in the Winning the Prairie Gamble exhibit at the WDM Saskatoon.