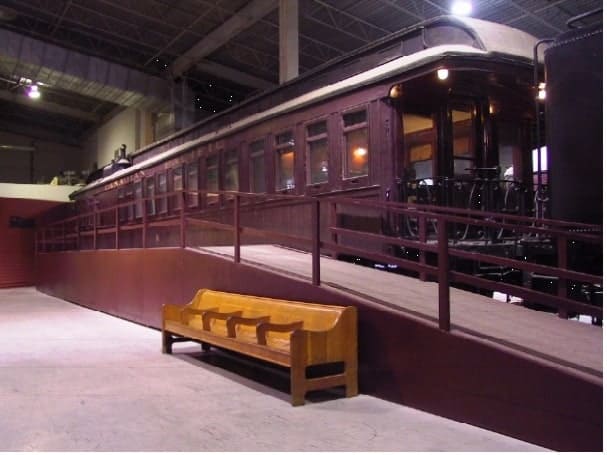 Built by the Barney and Smith Car Manufacturing Company of Dayton, Ohio as a sleeping car for the Canadian Pacific Railway in 1884, this train car (WDM-NB-345) went through many changes to become what it is today. Originally, it was one of 12 sleeping cars ordered in 1883 and delivered to Canadian Pacific between March and August of 1884.

By 1905, the car was already out of date and was renovated to include two bedrooms, a dining room, a kitchen, and an observation room. This car was on the first train to Saskatoon on the new line from Winnipeg in 1907.

In 1919, the car was assigned to the general superintendent of Canadian Pacific, Alberta area. Ten years later, the superintendent received a new car and this car was used by a division superintendent, assigned first to Moose Jaw and then to Saskatoon. The railway coach was renamed many times, including the ‘St. Lawrence,’ the ‘Brunswick,’ the ‘Nanoose,’ the ‘second Champlain,’ and the ‘third Alberta.’ In 1929, it took its final name of number ‘9.’

The car was donated to the WDM by Canadian Pacific in 1965 and can be seen at the WDM Moose Jaw.