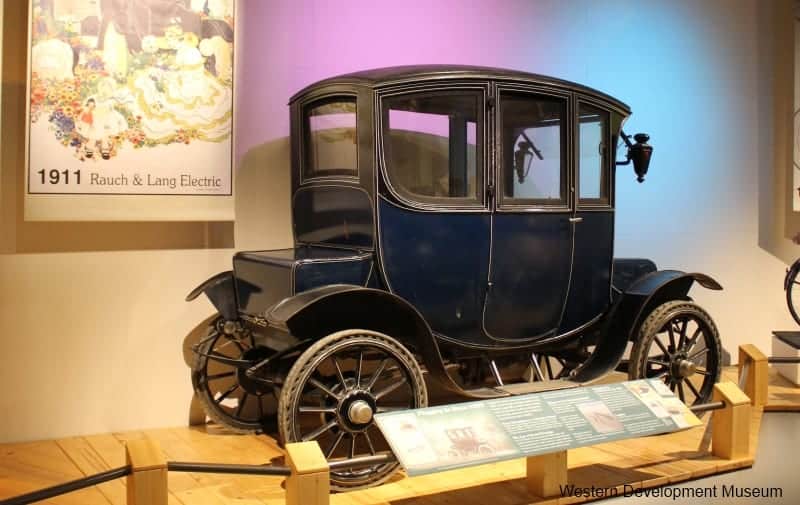 This Rauch and Lang electric car (WDM-1973-S-201) was built in Detroit in 1911. It was purchased in 1912 for $4,250 in Saskatoon. That’s around $100,000 in today’s money! Frederick Austin Blain, one of Saskatoon’s first city councillors (from 1906-1919), purchased the car as a gift for his wife, Rhoda Edna McKim Jickling. This car had a maximum speed of 18.5mph and could travel for 75 miles on one charge (80 volts), costing only about 1 cent per mile to drive. The car was advertised as being perfect for women because it could start without a crank and therefore required no manual labour. The lack of gasoline fumes was also used as a selling point to women, as it was generally believed that women were less able than men to tolerate such smells.

In 1900, 38% of cars sold in America were electric, but the popularity of the electric car waned as the electric car starter was popularized in the mid-1910s, eliminating the need for any car to be cranked. Additionally, gasoline-powered cars were able to travel farther than electric cars and gas stations were more common than vehicle charging stations, making gas-powered vehicles more convenient.

This car was considered ultra fashionable, and advertisements claimed that each car took three months of work by a master craftsman. The car seats four: two seats in the front facing the rear and two seats in the rear facing the front with the driver sitting in the back of the car. Instead of a steering wheel, the vehicle was controlled by a horizontal tiller bar. Pulling the tiller bar toward the driver turned the wheels to the right and pushing the bar away turned the vehicle to the left, much like on a boat.

Frederick Austin Blain was a member of Saskatoon’s City Council from its inception in 1906 until 1919, and was a director of the YMCA for 12 years. He moved to Saskatoon in 1903 at the age of 33 and lived there until his death in 1953. He was born in Guelph, Ontario and originally homestead in Manitoba before moving to Saskatchewan. In addition to his many other endeavours, he also founded a successful real estate business in Saskatoon.

The Rauch and Lang Electric Car is currently on display in the Fuelled by Innovation exhibit at the WDM Saskatoon.