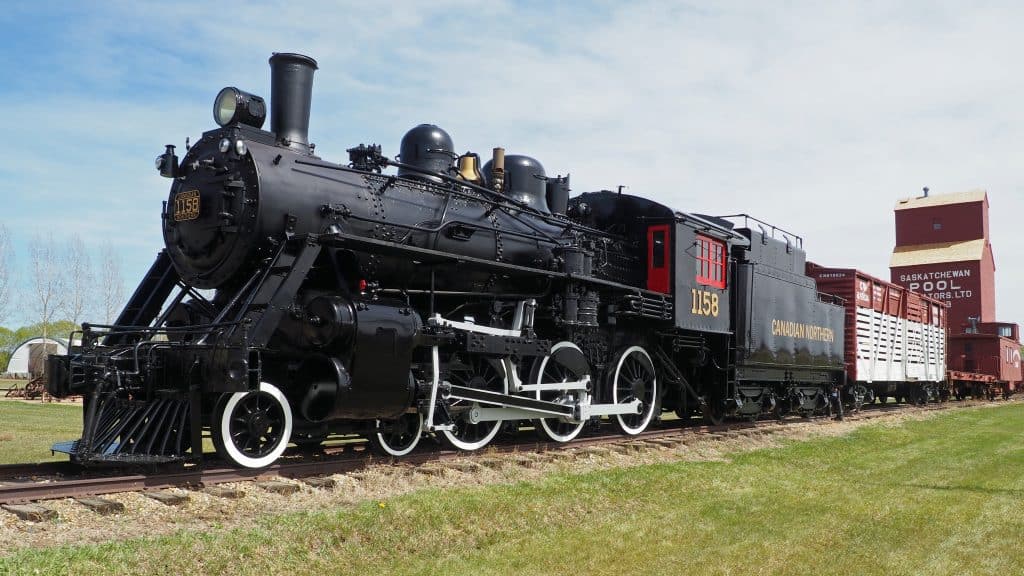 The middle of nowhere took on real meaning for immigrants to Canada’s Last Best West in the early 20th century. Most newcomers were delivered to the heart of this vast continent by train. The locomotive and cars on the rails at the WDM North Battleford symbolize the unrivalled importance of rail transport in the story of Saskatchewan settlement in the early 20th century. The WDM North Battleford’s Type 4-6-0 locomotive was built in 1913, for the Canadian Northern Railway. In the early years it was used in mainline passenger service. Locomotives like this gained the nickname workhorse of the prairies.

After years hauling passengers on the prairies, it was relegated to freight and branch line work. When Canadian Northern amalgamated with the Canadian National Railway (CNR) system in 1919, this locomotive was part of the deal. It was a switching engine in the yards at Blue River, British Columbia when it was pulled out of service in after a working life of nearly 50 years.

The boxcar was synonymous with emigration from the United States. Land in the USA was taken up before Canada’s west was settled. Americans, with need for more land, looked to Canada for a fresh start. They loaded their provisions onto boxcars headed northwest into Canada’s Last Best West. The Museum’s boxcar was built in 1929 by Canadian Car and Foundry in Montreal, Quebec and last used at Lloydminster.

Stock cars were also called into service by American farmers immigrating to Canada. They brought their cattle along on the trek, a ready-made start to establishing a herd in their new home. Stock cars also shipped cattle to market. The Museum’s stock car was built in the late 1920s for the CNR.

Flatcars, too, were called into service for delivery of farm equipment, whether owned by American immigrants or sent new from eastern factories to western distributors and sellers. The Museum flatcar is a straightsill type, a CNR piece last used in Jasper, Alberta. The caboose was built by Canadian Northern in 1912 and rebuilt in 1942. It saw its last service in the Great Lakes region of Ontario, and was taken out of service in 1991.

Rail travel and transport is at the heart of Saskatchewan’s settlement story. The railway ate up the miles that separated west from east, people from their homelands, and manufacturers from their markets. In addition to people, the railways brought letters and newspapers from home, supplies that lined general store shelves across the prairies, merchandise ordered through catalogues, and farm equipment from the East. The rail took farm produce to distant mills and markets.