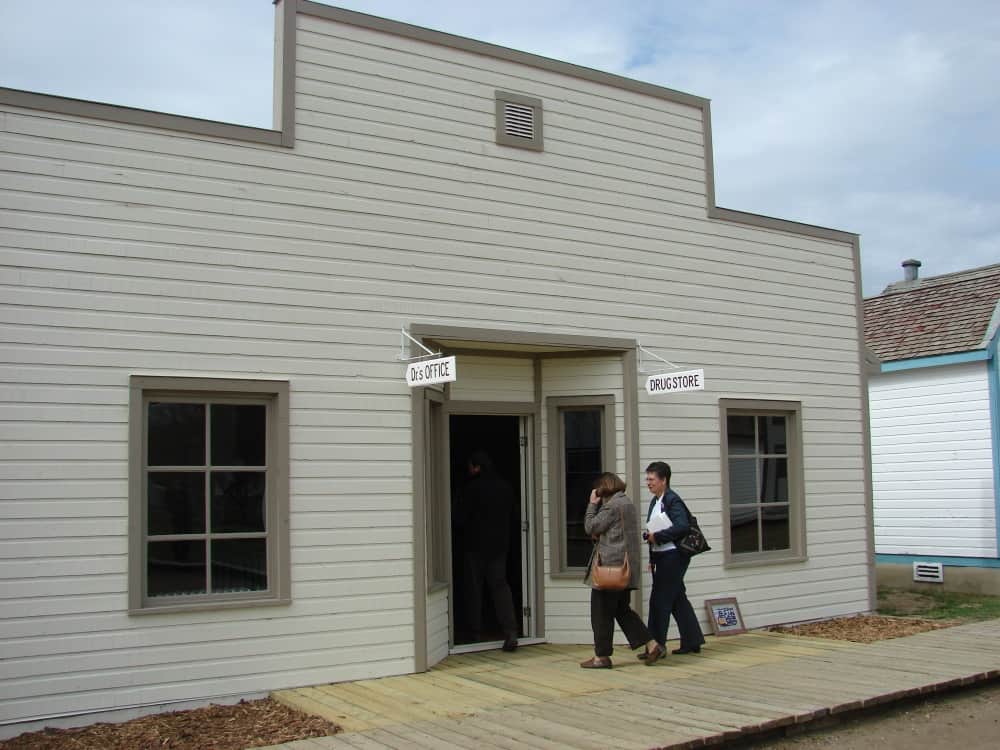 Our village at the WDM in North Battleford represents Saskatchewan in the 1920s. By this time towns and villages offered more services, more people had telephones and many had cars. But diseases like tuberculosis were common, as were communicable illnesses like diphtheria, whooping cough and scarlet fever. This shop holds both the doctor’s office and the drug store.

Doctors would not spend every day in the office; they would also be called out to accidents and illnesses and to deliver babies out in the country. In previous years, doctors travelled by horse and buggy in summer or by horse and sleigh in winter; but by the mid-1920s, they might have a car, at least for summer calls.

If a patient was short of cash, they might be paid with eggs, a chicken or two, or a roast of beef. But, if the doctor was one of the Saskatchewan’s new municipal doctors, they might have been paid a retainer by the town. For example, in 1915, the small town of Holdfast, near Last Mountain Lake, was in danger of losing its doctor after a year of bad crops. People were too poor to pay for medical services so the rural municipality decided to pay Dr Schmitt a retainer of $1500 to convince him to stay. This was the first time in North America that tax dollars were used to pay a doctor. The idea caught on and by 1927 there were 13 municipal doctors in towns like Beechy, Chamberlain and Senlac. In the 1930s, when times were tough, there were even more municipal doctors who had a guaranteed annual salary. This system, and those that were built on it, changed Saskatchewan health care and helped lead to today’s Medicare system.

The opening of a drug store was another welcome health care resource in small communities where people often had only home remedies to treat wounds or illnesses. The drug store in the 1920s was a place of wonder. There were lotions and potions and patent medicines meant to cure everything from catarrh to cramps. Many of the patent medicines, Lydia Pinkham’s for one, contained a liberal portion of alcohol. And during Prohibition when bars were closed, the druggist could legally sell liquor for medicinal purposes only.

Prescriptions back then were different, often requiring the druggist to mix a potpourri of ingredients to make an ointment, an elixir or a liniment. The druggist would use a mortar and pestle to blend substances together. Today’s pharmacists aren’t called upon to do this very often.

The drug store usually offered other things people needed: stationery, photographic supplies, veterinary medicine, candy, shaving gear and cosmetics, maybe even sheet music and phonograph records. Sometimes it rivalled the general store for the variety of merchandise it offered.  Merchants in the 1920s displayed their wares behind the counter or in glass cases. Customers did not help themselves as they do today – that was the job of the clerk or owner.