Eaton’s Once Upon A Christmas History 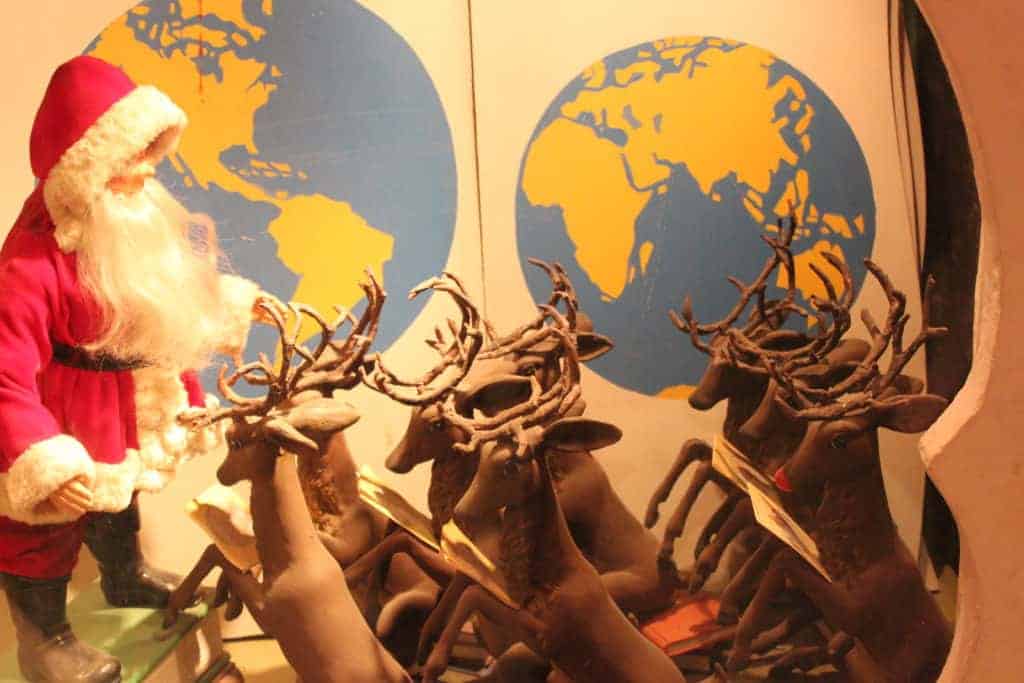 During the years following the Second World War, Canadians who shopped at Eaton’s in cities like Winnipeg and Toronto were treated to windows full of Christmas scenes and figures. Carols piped to the street wrapped the windows in the magical sounds of Christmas. It is these window displays that make up the Western Development Museum’s Once Upon A Christmas display.

Built in 1946 by aircraft technicians and Second World War veterans for the Eaton’s store in Winnipeg, the mechanical figures are power by war surplus motors. Appearing in the Portage Avenue windows of the downtown Winnipeg store, the displays complemented the annual Santa Claus parade. The figurines, built from plaster-of-Paris, danced and pranced under power provided by the air force navigational motors.

After many years, the scenes were put into storage until 1976 when they were divided and sold to other Eaton’s stores in Saskatoon, Regina and Thunder Bay. In 1977 the Eaton’s store in Saskatoon purchased the units that had gone to Regina and Thunder Bay and put them together on the second floor of their Midtown Plaza store where they appeared annually until 1984. In 1985 and 1986, the display was put up in Midtown Plaza. In 1987, the display came to the WDM Saskatoon.

It was 1987 when an Eaton’s official at the store in Saskatoon contacted the WDM. “Would you like a Christmas exhibit?” he asked. After the space of a heartbeat, the Museum replied – yes!

In the first year, WDM staff and volunteers racked up nearly 3000 hours mending and painting, fixing and repairing. Many of the motors had stopped working. Mechanical systems had broken down. Electrical wiring needed replacing. Scenes were soiled and figures were broken.

In the years since 1987, many volunteers and staff have added their special touches to keeping this exhibit up and running. In 1995, the Museum refurbished all the paper surfaces and lettering. In 1998, a mechanical and electrical overhaul was completed. Leading up to the 2000 season, Del Huyghebaert and Nelson Remenda put in 6000 volunteer hours, helping WDM staffers George Seabrook and Gene Barlow prepare the exhibit for Christmas visitors.

Members of the Museum’s Women’s Auxiliary have sewn cloaks and dresses, coats and trousers for the animated characters. Not an easy task, because the figures do not bend. Each costume had to be measured, cut, and sewn directly onto each figure. Hats, gloves, mittens and scarves were knit for miniature hands and heads.

Every season, Once Upon A Christmas figures bob and nod, twirl and tumble for more than 500 hours. Keeping Santa’s helpers on the job in the miniature workshop keeps WDM helpers on the job too! The exhibit is open at the WDM Saskatoon through January 15, 2023 and is included with Museum admission.

Once known as the Homesteader’s Bible, it was a long-standing Canadian tradition to shop for Christmas gifts in the T. Eaton Company mail-order catalogue. Some have claimed that only two books truly mattered in Canadian homes – the family Bible and the Eaton’s catalogue.

The T. Eaton Company of Toronto issued its first catalogue in 1884. In 1905, to serve the growing needs of the West, Eaton’s built a combined store and mail-order warehouse in Winnipeg. Saskatchewan people responded. They ordered clothes, household items, farm tools, radios, books and sports equipment. In homes across Saskatchewan, a little boy or a little girl could dream of balls and dolls, tea sets and train sets, enticingly arrayed in the pages of the Eaton’s catalogue.

The WDM has a large selection of things ordered from the Eaton’s catalogue.

When the T. Eaton Company of Canada folded in 1999, its collection of catalogues had already been donated to the George Shepherd Library in the WDM Corporate Office in Saskatoon. Specialty catalogues include plan books for mail-order homes and farm buildings, radio, wallpaper and seed catalogues.