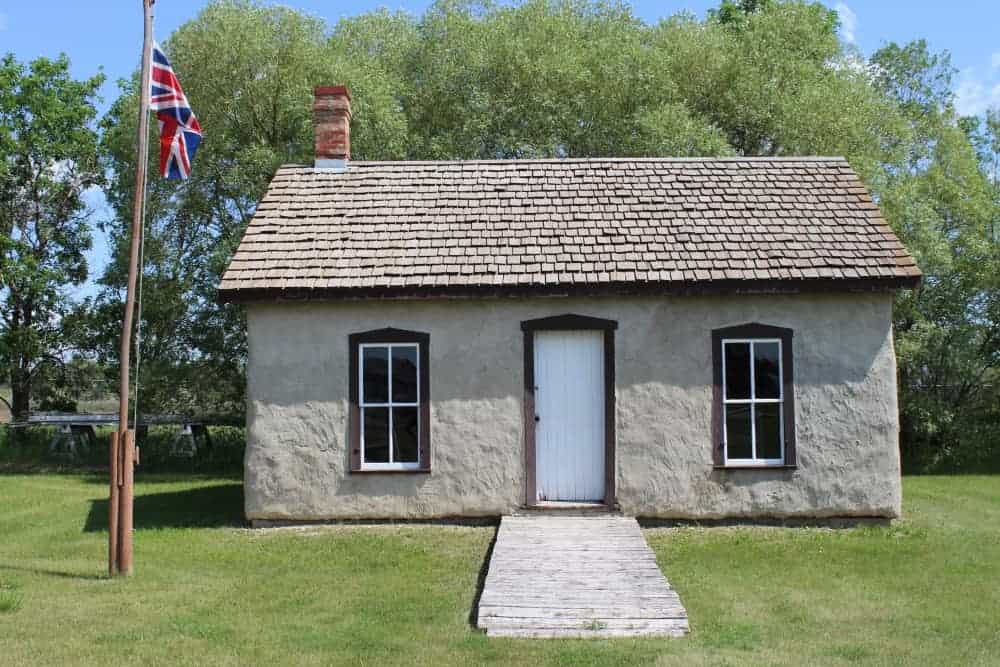 The North West Mounted Police Outpost now on site at the WDM North Battleford was originally built in 1895 near Jackfish Lake.

Land on the northern shore of Jackfish Lake was like a magnet. There was good water, plentiful bush for lumber and firewood, rolling landscape for shelter. By 1858 the Hudson’s Bay Company had established a post there to trade for furs with the Cree people of the area. In the 1880s Métis from the Duck Lake area settled in the area. By 1887, Aurele Arcand, a newcomer from Quebec, built a stopping house there on the road from Jackfish Lake to Frog Lake. The 1890 Annual Report of the North West Mounted Police (NWMP) recorded “the Indian Department and several principal farmers of Battleford selected Jackfish Lake district as the wintering place for their cattle, it being suitable for their purpose, feed and water being abundant and the surrounding hills affording good shelter.”

By 1895, the settlement at Jackfish Lake was thriving. People ranched, farmed and fished. Interestingly, butter-making was also listed as a local occupation. Tragedy struck the NWMP force in 1895 with the death of a constable. It was reported in the Saskatchewan Herald, that Constable Lutz had died on May 2, 1895. A week earlier he had been thrown from a wagon when the horses bolted. Two other constables sustained minor injuries in the same accident on April 26, 1895 at Jackfish Lake.

The following year, a lean-to for cooking and storage was added to the house. In a report to J. Cotton, Superintendent of C Division, it was recorded “At Jackfish Lake we found ourselves somewhat inconvenienced having no storehouse, one of the rooms of the barrack building had to be used in the joint capacity of kitchen and storehouse. These objections were overcome by the building of a lean-to. Half is now used as a kitchen, half as a storehouse. The material for this addition was selected from the suitable logs of an old building formerly standing in the barrack square here. The logs and lumber were hauled by our teams to Jackfish Lake, the building and carpenter work entailed was done, and well done, by our men. With your authority I have also had the house willowed and plastered on the outside. A neat strong fence taking all the buildings and hay corral I had put up without cost, our men hauling the rails and putting up the fence. We now have at Jackfish a serviceable outpost, the appearance of which is strikingly neat.”

But the detachment at Jackfish Lake was short-lived. By 1909, the Force had pulled out and records falter. We believe that eventually the land was sold for farming.

Moving the North West Mounted Police Outpost to the WDM

In the mid-1950s, the barrack was donated to the fledgling WDM, but not immediately moved. Then it was 1967, Canada’s centennial year, and people across the country were bitten by the heritage bug and buoyed by Canadian pride. Just over seventy years after it was built, the North West Mounted Police outpost was moved to the new Western Development Museum location in North Battleford.