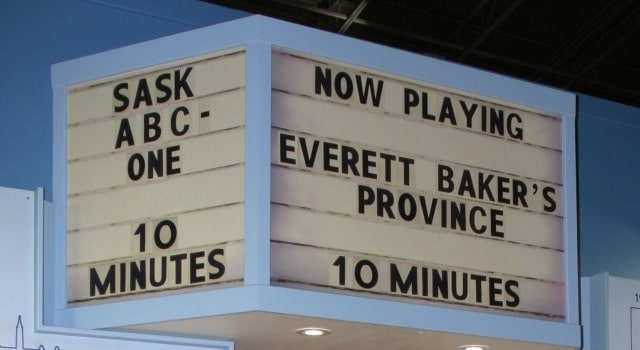 The WDM team working on the theatre project worked to capture that diversity, that immensity, that richness in the images we show in the Saskatchewan Theatre. Three unique presentations, accompanied by music created for 100 Years of Saskatchewan History, show the breath-taking grandeur of Saskatchewan. 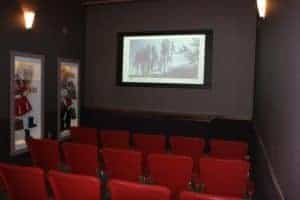 The Saskatchewan Theatre is an elegant, intimate and welcoming space that invites visitors to view the province with new eyes. Authentic early 20th century theatre seating for 15, complete with ornate cast iron supports, are complemented by heavy velvet draperies and a decorative closed beam ceiling.

Six vignettes set into the theatre walls feature dress-up clothing for a night on the town.

Photos taken around the province represent every letter of the alphabet. See images from WDM Photo Collections, Tourism Saskatchewan, the Gabriel Dumont Institute, the Saskatchewan Archives Board, Saskatchewan History & Folklore Society … to name just a few. Project curator Ruth Bitner contributed a host of her own shots taken on excursions around the province since the centennial year.

We mixed old and new, north and south, field and forest, animals and birds, and Saskatchewan people from all four corners of the province.

In 1937, Everett Baker was hired as a field man for the Saskatchewan Wheat Pool, a job he held for 25 years. In 1939 he bought a camera and his life took a new turn. He continued with the Pool, but his joy became photography as he chronicled Saskatchewan in the 1940s, 1950s and 1960s when most people in Saskatchewan lived on farms and in rural communities.

Everett Baker shows us Saskatchewan during the mid-years of the last century. We thank the Saskatchewan History & Folklore Society for sharing Baker’s photos with us.