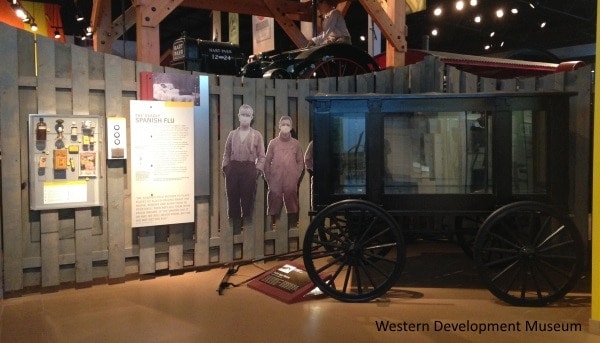 Neighbours shut their doors to neighbours, children watched their parents die, coffins piled up, waiting to be buried – the Spanish Flu struck with speed and cruelty.

Infected soldiers returning from the First World War in Europe brought the virus to Canada. In October 1918, it reached Regina and in the first three months of the epidemic, 3,906 people died in Saskatchewan.

The flu began like a cold with sneezing and coughing, then attacked suddenly with pain and chills. Pneumonia set in and death occurred soon after. Young adults between the ages of 20 and 24 were hit hardest.

With few hospitals in rural areas, communities set up emergency hospitals in schools, churches and hotels. Many people had to cope with the disease on their own. They wore gauze masks in public and tried influenza cures such as eucalyptus oil. Prohibition had been in effect since 1916, but many turned to a mickey of bootlegged brandy to fight the flu.

The Spanish Flu epidemic changed rural health care. Communities mobilized to build their own hospitals, and courses on child care and care of the sick were offered to farm women.

In Saskatchewan, 5,018 people died from the Spanish Flu, slightly more than the number of men from Saskatchewan who died in the war.