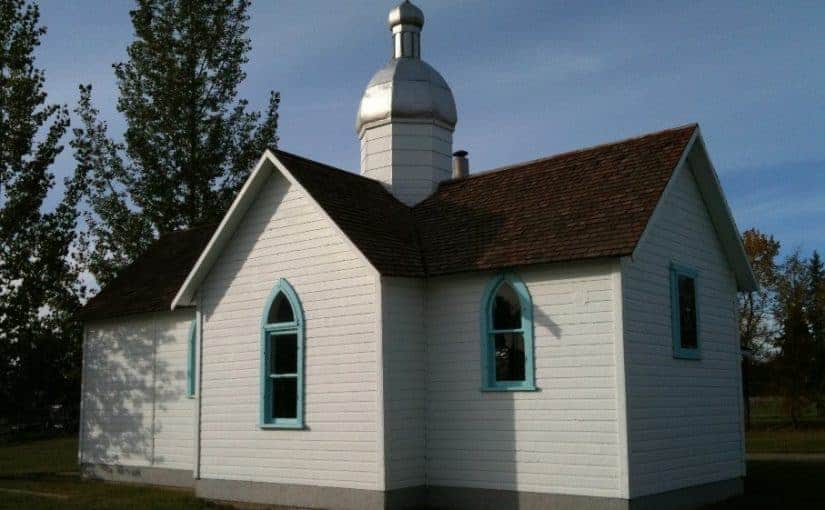 The Holy Trinity Ukrainian Greek Orthodox Church (artifact ID WDM-1973-NB-13900) at the WDM North Battleford dates to as early as 1909, when early Ukrainian settlers to the Hafford area of Saskatchewan pulled logs from Little Shell Lake to build the foundation of the church. Organized by Wasyl Pysklivets, this group worked through the winter of 1909-10 to construct the church. By Fall 1910, the church was completed, and the first Holy Divine Liturgy was celebrated. However, the interior of the church was not completed until 1917.

Congregants would walk as far as four miles each way to attend services in the Holy Trinity Church, and most stood through the whole service, as pews were only positioned along the walls for young children and the elderly.

Around 1917, shortly after the completion of the interior of the church, the extension at the front of the church was added along with the choir loft. A vestry off the nave was also added to the church at a later date. In about 1937, the linoleum still visible in the church to this day was added, ordered from the Eaton’s catalogue.

In 1968, the church was closed and moved to its present-day location at the WDM North Battleford, placed facing the same direction it had faced in its original location. In 1969, furniture was brought to the church by the congregation to decorate it for display. Holy Trinity Ukrainian Greek Orthodox Church can still be seen at the WDM North Battleford.

The sight of Ukrainian churches – Orthodox or Catholic – in the Canadian prairies is not unusual to this day. These churches, with their distinctive architecture, are spread across the prairies, a testament to the number of early Ukrainian newcomers to Canada. About 62% of Ukrainian immigrants to Canada before the First World War settled in the Prairies. Though now Ukrainian identity is strong amongst newcomers and descendants of these early immigrants, at the time, few of these immigrants would have thought of themselves as Ukrainian, as Ukraine did not yet exist as a country.

In the late 19th and early 20th centuries, Ukrainian immigrants built their churches significantly smaller than those in the old country, due in large part to a sparsely-populated Canadian prairie. Many congregations held only a few families, as it was virtually impossible to travel far to attend church on a weekly basis, especially in the harsh prairie winters. Churches were built by communities, with people donating time, supplies and decorations to their construction and maintenance. Most churches were built out of wood and were decorated with icons brought by families from their homelands. Many icons in Ukrainian Orthodox Churches were in the Western European tradition because they were easier to access in Canada than Eastern European ones.

In 2018, the Ukrainian Orthodox Church of Canada celebrated their centennial. Very Rev. Archpriest Taras Makowsky of Holy Trinity Ukrainian Orthodox Cathedral in Saskatoon spoke to the WDM about the early experiences of Ukrainian settlers and the recent centennial celebrations. He explained that the hardship faced by many of these early settlers made their faith stronger. Physical needs were always met first by building a house for shelter, but spiritual needs were a close second in significance; as soon as shelter was built, construction would begin on churches. “Humble beginnings, humble churches, humble homes,” he said of the lifestyles of the early Ukrainians in Canada.

Tataryn, Myroslaw. “Harvesting Heritage Seeds in Prairie Soil: The Role of Ukrainskyi Holos in the Formation of the Identity of the Ukrainian Greek Orthodox Church of Canada.” Historical Studies, no. 71 (2005): 94-109. Accessed September 28, 2018. http://www.umanitoba.ca/colleges/st_pauls/ccha/Back Issues/CCHA2005/Tataryn.htm