The Restoration of a Waterous Road Roller 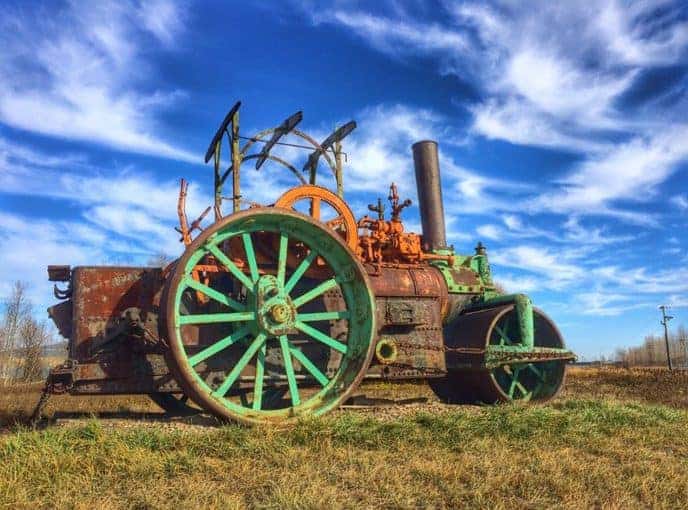 If you’ve been to the WDM Moose Jaw in the past year or so, you may have seen our 1914 Waterous Road Roller (WDM-1973-S-1080) on display. Before August 2017 you may have missed it, as it was in our Corporate Office being restored.

Having been left on the hill outside the WDM Moose Jaw for years, this steam roller was in poor condition when the decision to restore it was made in late 2016. The canopy had deteriorated over time and was completely destroyed in a windstorm. The paint, which was not original or correct, had faded and chipped. Rust was evident across the machine. Our Chief Engineer and Restoration Manager Tim Pomeroy shared a bit about the restoration project.

Before doing anything, he surveyed the engine to see what needed to be done, and then the engine was prepped for moving. This involved lubricating the axels and steering mechanisms and removing pieces that could impede movement. On November 3, 2016, it was then pulled off the hill by a John Deere tractor supplied along with a driver by South Country Equipment and media blasted to remove the paint and rust.

After the steam roller was media blasted, it was primed to protect the exposed metal surfaces until it could be restored and painted. Q-Line Trucking hauled it to our Corporate Office in Saskatoon on November 8, 2016, where it sat for a few months as a team of staff and four volunteers worked on the restoration process.

Many parts were in poor shape or were missing altogether. Luckily, these parts were either fabricated or sourced from the WDM parts storage facility. The green colour of the paint was chosen based off a Waterous Steam Traction Engine currently in storage at the WDM Corporate Office. The yellow detailing was all hand-painted on the roller itself; none of it was transferred on. This delicate work was done by a Saskatoon sign smith, Dave Smith. It was important to get someone who specialized in these fine details to paint them so it could be done just right. These fine details were all based off original catalogue illustrations to ensure they were as accurate as possible.

The canopy, which was originally oak, was rebuilt with pine. Details were based off the illustrations from the Waterous catalogue. The catalogue illustrations were very helpful in many aspects of restoring the steam roller. In addition to the catalogues, the WDM consulted with Heritage Park in Calgary, where one of only two remaining fully-operational Waterous steam rollers still exists. Early on in the restoration process it was decided that this was an aesthetic restoration and that steps to make it operational would not be taken. Despite this, Tim Pomeroy explained that it wouldn’t take too much work to get it operational from the state it’s in now.

The plumbing of the steam engine was all restored as well. The original builder’s plates had been removed while the roller was on display outdoors in Moose Jaw, but have since been reattached. The front castings on the steering mechanism were cracked in half and had to be totally repaired. Additionally, the smoke box door was thought to be missing, but was located in storage at the WDM Moose Jaw.

The tool box on the back was based off photos of other Waterous steam rollers from the time period. There had not been one on the back of it when the restoration process began. The whistle was pulled together from parts of about four different whistles, and interestingly, the cleats for the rear wheel were found in the engine’s water tank!

Once the canopy was replaced, the entire body was painted, and the plumbing was restored, the engine was good to go, and in August 2017, the roller was again hauled by Q-Line Trucking to Moose Jaw, where it was put on display, indoors this time to protect it from the elements that had done such damage to it before.

There are only about half a dozen of these Waterous rollers still in existence in Canada today, and only two of them are operational. As mentioned, one of the operating ones is in Calgary at Heritage Park, and the other is in Ontario.

There are many interesting features on this roller. The front wheel of the roller is actually two wheels sitting very close together. The entire machine weighs about ten imperial tons. It was built in 1914 in Brantford Ontario by the Waterous Engine Co. Ltd, and the City of Saskatoon purchased it second-hand in Winnipeg in 1926 for $2,950. The history of this item before it came to Saskatoon is a mystery. It was purchased from a used equipment dealer, and we have found no record of where it was used before 1926. The City of Saskatoon used this roller until about 1933-34, when it was retired. It sat outdoors for many years until the WDM obtained it in 1948.

Waterous was one of the only companies in Canada that made purpose-built steamrollers. Other companies made steamrollers by converting traction engines instead. It is a two-cylinder, simple, coal-fired machine with a lap-seam boiler, and it was designed for one-person operation. The Waterous steam roller was also featured on a 1996 Canadian postage stamp!

The entire process of restoration took about 9 months from start to finish. The careful work is a testament to the dedication and care our staff and volunteers take with our artifacts. Visit the WDM Moose Jaw to see the final product in person.