Outreach and Communication: A New Display at Marion M. Graham Collegiate by the WDM 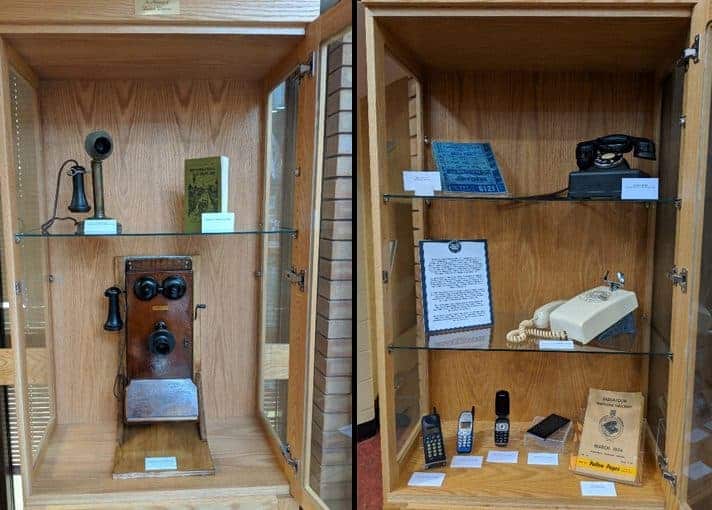 On March 6, 2019, the WDM installed a small display in the Marion M. Graham Collegiate library in Saskatoon. This installation was part of a renewed effort for outreach at the WDM.

The installation, focusing on the history of telephone communication in Saskatchewan, features a variety of phones, from the earliest models right up to present-day cell phones, showing the evolution of this communication technology.

Social isolation was (and still is in many ways) a significant problem for people living in rural Saskatchewan. Before the telephone, people had to rely on in-person visits or an often-unreliable mail system to communicate with each other. In the harsh winters, people were even more isolated, as in-person visits could become all but impossible. Diaries and letters from early settlers express extreme loneliness and isolation.

Despite an emerging culture of hospitality, isolation often left people desperate to hear another voice. The telephone was a revolution in this regard. It allowed isolated farmers to contact family and friends at a moment’s notice, and it connected them to cities in case of emergency.

Telegraph remained the more reliable form of communication up until the end of the Second World War. However, despite this, many preferred the telephone anyways. It was cheaper and it allowed people to communicate verbally, which, especially in an urgent or emergency situation, was seen as a strong benefit.

The first telephone exchange in what is now Saskatchewan opened in Regina in 1887. By 1905, when Saskatchewan’s population was around 257,000 people, 2,000 telephones were in use in the province.

To prepare for this display, curatorial assistants at the WDM Corporate Office in Saskatoon selected some phones from our artifact collection, dating from the late 19th century through to about 2015. Two phone directories, from 1948 and 1954, were also included in the display, along with a 1910 book titled “How to Build Rural Telephone Lines.” These books round out the display by sharing how people could find phone numbers in a pre-internet age, and how people learned to build the phone lines that so many relied on. Some of these selected items are accessioned artifacts, while others are part of our education/extension collection.

One of the phones we used, a wooden wall telephone, required a wooden mount to be made to support it, so it could stand properly in the display case. It also required some minor repair work, as the earpiece was missing a part. This phone was not an artifact but rather a phone kept in storage for potential spare parts, and as such, we were able to repair it without concern about damaging an artifact. 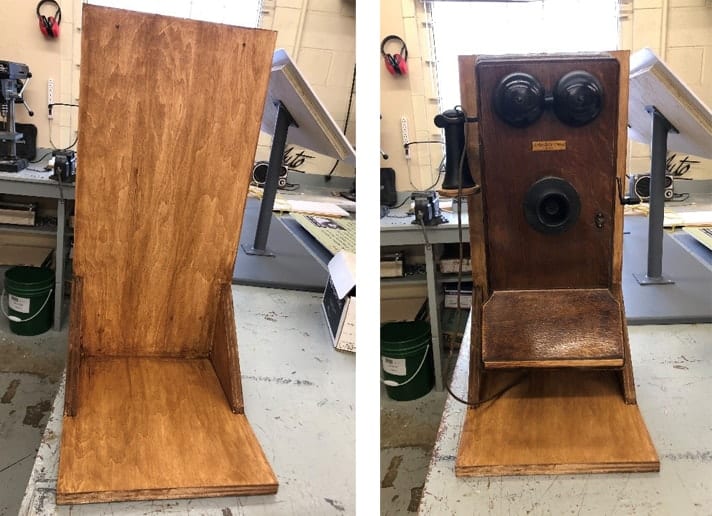 In addition to this, plexiglass or foam mounts had to be built for the books, the cell phones, and one of the older telephones to provide support for the phones and to raise them up to make them more visible to viewers.

The two cases hold eleven items plus the text about the display. This display will be up until early June. We hope the students and staff at Marion M. Graham Collegiate enjoy learning about the history of communication in Saskatchewan!