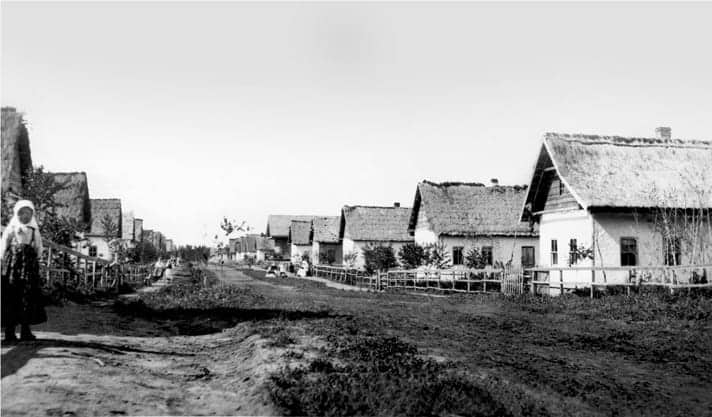 Doukhobors have lived in Saskatchewan for 120 years, first arriving in 1899. They came to Canada with the hope of practicing their religion freely. The WDM has partnered with the Saskatchewan Doukhobor Living Book Project to tell the story of the Doukhobors of Saskatchewan.

Below are stories of two Doukhobor families and the clothing they brought with them. The suit and dress will be on display at the WDM Saskatoon for the duration of the display of the Saskatchewan Doukhobor Living Book Project from June 30 to October 20, 2019.

Author Leo Tolstoy had heard about the plight of the Doukhobors in Russia and with the help of other sympathizers, sponsored their immigration to Canada. In 1899, 7,500 followers of the Doukhobor faith emigrated from Russia for land and for religious freedom. The Canadian government promised exemption from military service and allowed Doukhobors to establish communal farming villages similar to those in Russia.

In 1907, the Canadian government, cancelled the agreement, requiring Doukhobors to abandon their villages for separate farmsteads. Some chose to comply with these requirements and stayed in Saskatchewan on their individual homesteads, while those who refused had their homesteads cancelled and subsequently resettled on purchased land in British Columbia, Alberta and elsewhere in Saskatchewan where they were able to continue their communal lifestyle. 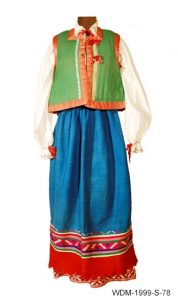 In 1899, Onya and Fedyor Perehudoff travelled with thousands of others of Doukhobor faith to land set aside for them in Western Canada.  It was the single largest mass migration in Western Canada history.

When Onya Kabaroff wore this wedding ensemble for her marriage to Fedyor Perehudoff, there was no way of knowing that a new home in Canada was in their future. Likely made for her by her mother, the wool and linen of this garment were homespun, while the cotton and other fabrics were purchased on an annual trip to a larger town.

Onya and Fedyor, whose anglicized names became Anna and Fred, settled in the small Doukhobor village of Ospennia, near present day Blaine Lake, Saskatchewan. Most Doukhobors adopted a Canadian style of clothing not long after coming to Canada. Onya, like most Doukhobor women, continued to wear her traditional outfit throughout her life for Sundays and special occasions.

In 1899, 11-year-old Alex Nemanishen travelled to Canada with his family and thousands of others of the Doukhobor faith. The Nemanishen family settled in the small Doukhobor village of Kirilowka (Kirilowvla), near present day Langham, Saskatchewan. Alex married Anastia Bludoff, a Doukhobor woman from the Veregin, Saskatchewan area around 1908.

Alex left Saskatchewan for work at a lumber mill in Brilliant, B.C. He hurt his leg while on the job, forcing him to use a cane for the rest of his life. After the accident he returned to Saskatchewan, using his carpentry skills to earn money to buy land. In 1926, at 38 years of age, Alex purchased land near Langham, close to where Kirilowka village had been.

By the time Alex died in 1971, traditions in Doukhobor communities had changed enough that he was not buried in the suit you see above. This traditional Doukhobor men’s suit was made for him by his wife Anastia and his mother-in-law in the early 20th century. Alex’s mother-in-law took flax grown in their new fields in Canada and spun and wove it into linen. Anastia used her sewing machine to turn the cloth into a matching traditional shirt and trousers.

The Saskatchewan Doukhobor Living Book Project tells the story of how the Doukhobors in Saskatchewan practice their faith with a Doukhobor ‘Moleniye’ (prayer service) as practiced by Saskatchewan’s Independent Doukhobors. It captures the oral history of Doukhobor elders and explores how the community has evolved since first immigrating to Saskatchewan 120 years ago. The project consists of three components: a documentary film, an immersive soundscape created by Spirit Wrestler Productions, and an exhibit produced by the WDM.

– Portions of this article were written by the WDM for the
Narrative Threads: Crafting the Canadian Quilt project with the Virtual Museum of Canada.