Saskatchewan Fashion Week started in 2011 with the goal of shifting the fashion industry from a competitive mindset to a more collaborative one. The idea was to allow fashion designers to interact with each other in a new way, to learn from one another instead of working against each other. This year marks the eighth and final year of the event. Running from May 9 to 11, 2019, the organizers expect the event to go out on a high note.

Fashion is an often-overlooked aspect of culture and history, but it is tightly-interwoven into the fabric of the past. The fur trade in what is now Canada, for example, was fuelled in large part by a fashionable desire in Europe for hats made from beaver pelts. There is also a lot that we can learn about people from the clothes they wore. This is explored annually at our fashion shows featured at the WDM’s Pion-Era event in Saskatoon. Our volunteer-driven fashion shows highlight different themes in fashion history and connect the clothing shown to the historical context in which they were designed and worn. A well-known example would be the rising hemlines of skirts during the Second World War to save on fabric.

In the WDM’s collection are hundreds of articles of clothing worn by Indigenous peoples and non-Indigenous settlers in the 19th century on the Canadian prairies right up to the present day. 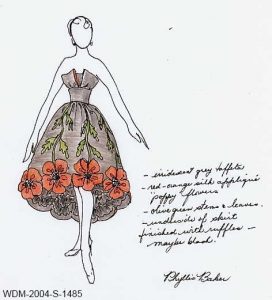 The WDM collection contains all kinds of clothing from the ordinary to the extraordinary. The garments in the Phyllis Baker collection are an example of exceptional fashion design in Saskatchewan History. Phyllis Baker was a clothing designer who studied fashion design at Ryerson University in Toronto in the 1950s and then came to Saskatchewan. She completed a Bachelor of Fine Arts degree at the University of Saskatchewan in 1980.

Baker loved flowers and bright colours, and her love for these are reflected in her garments. One of the pieces in the WDM collection that reflects this is her poppies gown. This evening gown is made of silk taffeta and the poppies are silk appliqué. The underside of the skirt is finished with black ruffles.

The WDM recently hosted an exhibit titled “Our Collective Threads,” which examined the history of Saskatchewan through articles of clothing. One of the artifacts featured was a t-shirt by the SheNative company in Saskatoon, a company built to employ and empower Indigenous women through clothing. 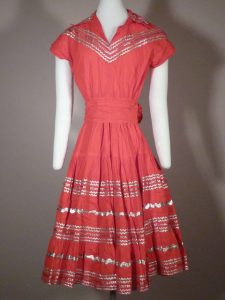 Another example is a square dance dress
(WDM-2017-S-86), bought at Vern Welker Men’s Wear Store in Saskatoon which carried a line of square-dancing clothing for men and women. It was worn by Wilma Jess to many square-dancing events in the 1960s, which are still popular across Saskatchewan to this day!

Clothing can tell us a lot about history, and it is important we save these items for future generations. We wish the designers showing at the final Saskatchewan Fashion Week all the best!