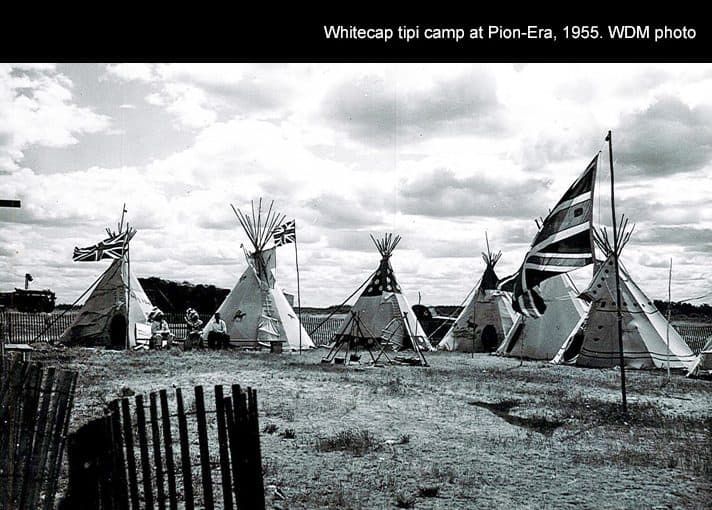 Over the past year, the Western Development Museum (WDM) has been working to renew an historical relationship with Whitecap Dakota First Nation. Every summer for more than 20 years in the 1950s, 60s and 70s, Whitecap members participated in Pion-Era at the WDM Saskatoon. Members set up a tipi camp, performed dances and demonstrated other cultural activities, educating settler visitors about Dakota culture. Their participation was well-documented in WDM photographs, but little was known about their experience.

In working with Whitecap Elders, Knowledge Keepers, leadership and staff, much has been learned about this history. Inspired by photograph naming projects like Library and Archives Canada’s Project Naming and the Saskatchewan History and Folklore Society’s Visual Repatriation projects that seek to name Indigenous peoples in historical photographs, almost all of the individuals in the many photographs held in the WDM Archives and George Shepherd Library have been named. Our next steps are to reach out to other First Nations with individuals pictured in these photographs.

We also learned about the motivations for the Whitecap community’s participation. Whitecap attendees took Pion-Era as an opportunity for social, economic and political exchange that would not otherwise have been easily accessible under the controls of the Indian Act. This was a time when travelling outside of the reserve still required permission from the Indian Agent as part of the Pass System. For each visit, the WDM Curator George Shepherd had to write to the Indian Agent in Regina, asking permission for Chief Harry Littlecrow and Whitecap members to attend the event.

Travelling from Whitecap to Saskatoon each summer for Pion-Era is remembered fondly by the Whitecap Elders who have shared their history with Whitecap leadership and staff and now with the WDM. They recall that this was time to spend with relatives and socialize, as well as dress in their regalia and dance pow wow with other Indigenous people – activities that were otherwise difficult due to limited mobility and the aforementioned Indian Act controls.

To learn more about the WDM’s commitment to Reconciliation visit us at wdm.ca/reconciliation