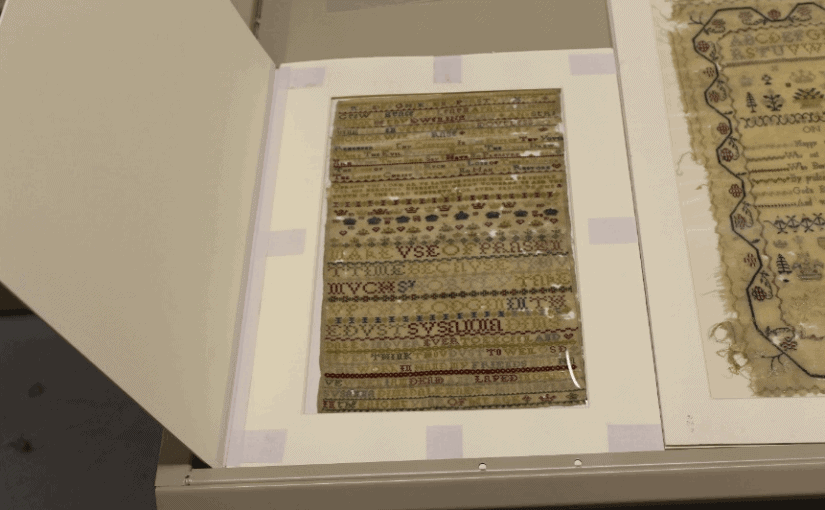 In our final blog about Susanna Dimsdale’s sampler, we will explore how other historical documents and sources can help provide insight about an artifact’s life. In addition to researching the object itself, we can use census records and archival documents to help place the sampler’s maker in time. In this case, we are looking for clues about Susanna Dimsdale herself as well as her family members.

Using the Census for Artifact Research

For a 17th to early 18th century dating of the sampler, we can turn to the English census records between 1611 and 1715 where three Susanna Dimsdales were enumerated.

The earliest of these Susannas was baptised in 1608, the daughter of Thomas Dimsdale. This would make her 8 years old in 1616. This Thomas Dimsdale would match up to the TD on the sampler.

A second Susanna Dimsdale was baptised in 1678 and was the daughter of Joseph Dimsdale. Joseph Dimsdale could be represented by one of the “ID”s in the sampler that we identified in Part One of this series.

Any of these Susannas could be the maker of the sampler, dating it between as early as 1616 and as late as 1715. Still a century apart, but at least more precise than “previous to 1875.”

What’s in the Archives?

The Dimsdale surname also appears in a listing of the English Nobility, making it an easy one to research.[1] Genealogical and other archival sources for an early to mid 18th century dating of the sampler, point to other possible Susanna Dimsdales. Thomas Dimsdale, the Baron of the Russian Empire (b. 1712, d. 1800) had a daughter Susanna born in 1749.[2] (Baron Thomas Dimsdale’s father John Dimsdale also had a daughter Susanna, presumably in the late 17th century.)[3] In 1742, another Susanna Dimsdale was born in Hertford to Joseph Dimsdale, a surgeon.[4] Susanna (b. 1742) and Susanna (b. 1749) could equally be the makers of the sampler; at 8 years old it would have been 1750 for the first Susanna and 1757 for the second.

Beyond the archive, further studies could test the materials used in the sampler’s manufacture to determine chemical properties and compare the chemical make-up of the sampler to others from many of England’s geographic regions to determine the place of origin. This geographic information could be used in relation to census records to help determine which Susanna Dimsdale made the sampler.

A study of the dyes and their chemical make up could provide further clues to the origin of the sampler. For now, the sampler is being kept safe in storage in its own protective matte, preserving its fascinating story for generations to come. We’ve accepted a “circa” – or approximate date – dating for the sampler of c. 1611 to 1750 and have catalogued it as such.

[1] Sir Bernard Burke, A Genealogical and Heraldic Dictionary of the Peerage and Baronetage, (London: 1878), available at https://bit.ly/2uqIaiB