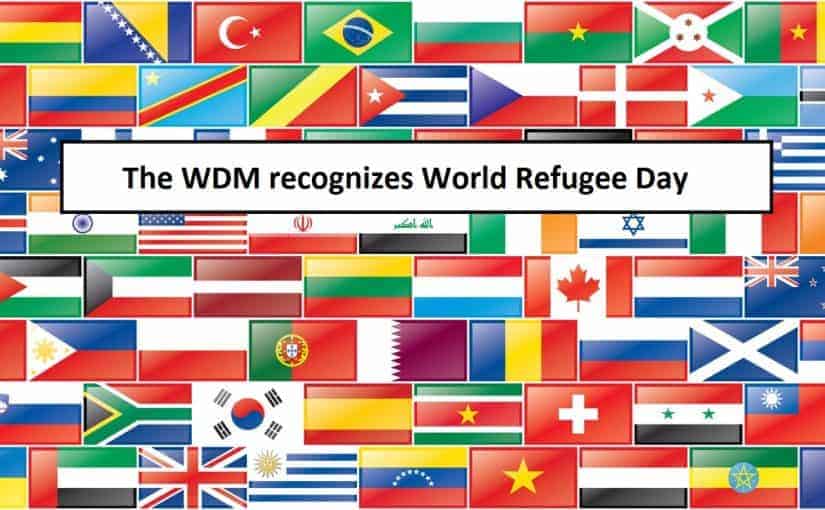 June 20 is World Refugee Day, a day to show support for and solidarity with people fleeing violence and oppression. To mark this important day, we’re highlighting some artifacts from our collection connected with refugees who came to Saskatchewan over the course of the 19th and 20th centuries fleeing persecution.

The United Nations Convention Relating to the Status of Refugees was established in 1951 and created an official legal class of persons called “refugees.” This Convention was expanded in 1967, as originally it only applied to people impacted by the Second World War. The 1967 expansion extended protections to all peoples displaced by violence.[1] The 1951 Convention defines the term “refugee,” the rights of displaced peoples, and the legal obligations states have to protect them.

Prior to the 1951 Convention people fled their homelands in large numbers but there was no standard legal framework to seek asylum. Today, many of these people would be legally considered refugees.

Today’s Museum Stories will focus on four stories of people coming to Saskatchewan to escape persecution or violence: The Doukhobors from Russia, Fred Mendel from Germany, Ivan Zadravec from the former Yugoslavia, and Vietnamese, Laotian, and Cambodian refugees fleeing the war in Vietnam.

A minority Christian group from Russia, the Doukhobors believe in peace and equality, and that every person’s soul holds the Spirit of God. Because of this belief, they are pacifists, believing that attacking any person attacks the Spirit of God within them. These beliefs led them to challenge the Russian Government and the Orthodox Church in the late 19th century, leading to increasingly oppressive conditions for them.

Starting in 1877, the Russian military began drafting Doukhobor men. Military service was counter to the pacifist beliefs held by Doukhobors. Those who refused to serve were tortured and exiled. In protest, on June 29, 1895, many Doukhobors burned their weapons and military registration papers. Many who participated in this were forced from their homes. They decided to look for a safe haven elsewhere, and turned to Canada.

In Canada, at the time, the settlement focus in the prairie provinces was agricultural development. Though English-speaking immigrants were preferred, Canadian Minister of the Interior Sir Clifford Sifton believed that peasants from Northern European farming communities would make good settlers, as they were hard workers and had experience farming in cold climates.

Some Canadians raised concerns about bringing in groups like the Doukhobors. Assimilation was a priority for many, and they were concerned that some would refuse to assimilate. However, the Canadian Government was trying to attract white, Christian farmers, and the Doukhobors fit the bill. Canada offered nearly 7,500 Doukhobors homestead land in present-day Saskatchewan, even offering an exception to the standard homesteading rules. Most homesteaders were required to work on individual farms, but they allowed Doukhobors to settle in villages and work the land communally, as many of them objected to private land ownership for religious reasons. They also promised to respect the pacifist beliefs of the Doukhobors and would not require military service from them.

In 1899, two ships full of Doukhobor settlers came to Canada to start their new lives. By 1900, over 55 Doukhobor villages had been constructed on Treaty 4 and Treaty 6 territories. However, in 1904 the Canadian Government reversed its stance and required Doukhobors to own and farm land individually. In 1907, most of the land that had been given to Doukhobors was reclaimed by the government and redistributed to other settlers. Only those who had agreed to own their land individually were permitted to keep it. Many of those who refused, moved to British Columbia and Alberta.

Though the Doukhobors brought few possessions with them from Russia, they did bring a few items. Some of these items have since been donated into the WDM’s collection.

Fred Mendel was born in Germany in 1888. In 1912, he inherited a slaughterhouse and began his work in the meat industry. However, by 1940, life for Jewish people in Germany had become too dangerous, so Mendel made the decision to leave and come to Canada. Though the immigration status of ‘refugee’ did not yet exist, today he might have been classified as such. He settled in Saskatoon and founded a meat packing company, Intercontinental Packers (now known as Mitchell’s Gourmet Foods).

Intercontinental Packers initially focused on packaging and shipping bacon to Britain for the war effort. After 1945, he expanded operations into Alberta and British Columbia while maintaining his base in Saskatchewan. By the time of his passing in 1976, Intercontinental was one of the largest meat packers in Canada.

Mendel is probably most well-known in Saskatoon for the art gallery that was named for him, which closed in 2015 in preparation for the new Remai Modern which took its place. There is also a park in Saskatoon named for him, located at the corner of 17th Street West and Avenue W South. He was recognized for his philanthropy and contributions to Saskatoon and Saskatchewan. He sponsored prizes at local fairs and funded extension projects for farms. He was an avid art collector and made a large financial donation to the Mendel Art Gallery as well as donating art to the gallery.

Ivan Zadravec and his wife and brother escaped the former Yugoslavia in 1956, hoping to find a better life in Canada or Australia. They lived in a refugee camp in Austria for two years until they were given permission to come to Canada. They took a ship across the Atlantic and landed in Halifax in May of 1958 and then took a train to Saskatoon. Ivan, a blacksmith by trade, was offered a job at Crown Ironworks in Regina.

In 1961, Ivan decided to start his own business called Ivan’s Iron Railings. He didn’t own most of the tools required for his trade, so he designed and made them himself. Tools he made included a steel cutter, molds for railings, and tools for twisting and shaping steel. His wife worked alongside him and he was able to hire some other workers. He made railings, horseshoes for the RCMP, coffee tables, planter stands, and many other decorative items.

In 1964, Ivan moved his shop to 442 Quebec Street in Regina. His works can be seen throughout Regina and the surrounding area, including the railing on the roof of the Seven Oaks Inn, the indoor stair railings at Rainbow Towers, and fences around the city. In 1972, when he was in his thirties, Ivan had to give up blacksmithing for health reasons. He sold his business and tools and began working on house construction. In 1979, he retired due to health conditions. Ivan passed away in 2012.

In the Winning the Prairie Gamble exhibit at the WDM Yorkton you can find an exhibit on immigration to Saskatchewan. The final section of this exhibit focuses on refugees displaced by the Vietnam War (1955-1975). Thousands of people from Vietnam, Cambodia, and Laos fled their homes because of the war. News broadcasts at the time showed people crammed onto overcrowded boats and dubbed them “boat people.” Most of these refugees landed in countries such as Malaysia, Thailand, Hong Kong, Indonesia, and the Philippines. From there, humanitarian groups sponsored flights for them to travel to and settle in countries around the world, including Canada. Some of the refugees who came to Canada settled in Saskatchewan.

Refugees from around the world have come to Saskatchewan for well over a century, diversifying and enriching the cultural fabric that makes up this province. Today we recognize the contributions these people have made to our communities.

[1] Dan Stone, “Refugees then and now: memory, history, and politics in the long twentieth century: an introduction,” in Patterns of Prejudice (2018). P. 105.