Spoons, spoons, so many spoons: a deep dive into an ordinary collection 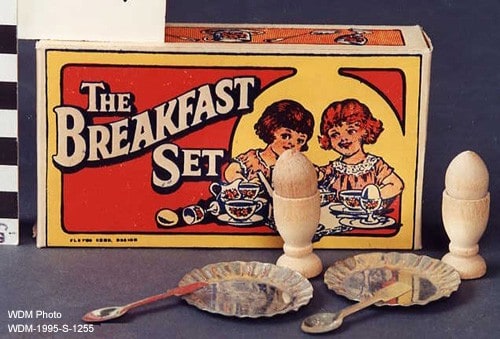 Have you ever explored our online database of artifacts? What kinds of artifacts would you search for? For fun, we recently searched the spoon collection at the WDM in our database. Did you know if you type “spoon” into the database you get over 350 results! That is a whole lot of spoons. Now, why would a museum need so many spoons in its collection? Simply put, there are many types of spoons for a wide array of uses. Spoons have also been made from every material known to humankind. Spoons, besides just being utensils, can also be found as measuring devices, toys, advertisements, art works and memorabilia, just to name a few.

A little history on the spoon. Spoons are one of the oldest serving utensils known to exist, along with chopsticks and knives. Some of the earliest surviving spoons date back to the Ozieri culture, in what is now Sardinia, that date to 3200 to 2800 BCE. Forks were not a common utensil until the 18th century.

Spoons have permeated everyday culture. Spoons are referenced 24 times in the Bible. There is the Allegory of the long spoons which is all about how people treat each other. There are folklore beliefs about spoons, such as the Ukrainian Christmas Eve folklore of throwing a spoonful of ‘kutia,’ which is porridge-like dish made of boiled wheat, poppy seeds, dried fruits and nuts to the ceiling. If the kutia sticks, you will have a good and prosperous new year. Spoons have also become a way to explain mental and/or physical energy levels for those with disabilities or chronic health problems.

Take a look at the variety of some of the spoons and spoon related items in the WDM’s collection!  Do any of these make you think of a spoon that has a special place in your memory?