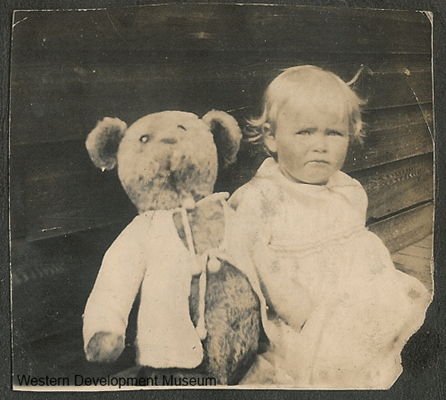 This month we’re featuring a special teddy bear from the WDM collection. 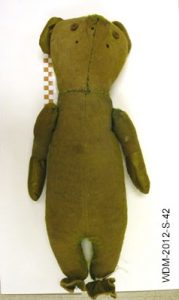 Sarah Dyke came to a small English village as a teacher in 1910. Upon her arrival, she quickly fell in love with George Farris, the older brother of one of her students. Despite their attraction, George did not have enough money to support a family. He worked for his father for room and board rather than for a wage. Determined to marry Sarah, George decided to head to Canada with the hopes of finding a well-paying career. He traveled to Saskatoon in 1910 and worked odd jobs until he managed to get a job as an engineer at Saskatoon’s City Hospital. With a stable job with good wages, George sent for Sarah to join him.

Sarah arrived in Saskatoon on July 14, 1912, and she and George were married that evening. They had two daughters: Marjorie in 1914 and Sybil in 1917. However, Sarah wasn’t quite happy with life in Saskatchewan. She missed England, especially the milder climate. When George received a letter from a former City Hospital colleague who had returned to England inviting George to join him back in England to work in a hotel, Sarah encouraged him to take the offer.

On Sybil’s third birthday, April 24, 1920, the Farris family boarded a train leaving Saskatoon. At the train station, Sybil’s godmother gave her a large green teddy bear. The Farris family traveled back to England and never returned to Canada. In 2012, 92 years after Sybil left Saskatoon, her daughter Angela came to Saskatoon to see her mother’s birthplace. With her 95-year-old mother’s permission, Angela brought the bear with her on the trip before it was eventually donated to the WDM.

The well-loved bear is now in storage at the WDM Corporate Office in Saskatoon. It tells a frequently overlooked story of settlers who did not stay in Canada, instead choosing to return to their country of origin.