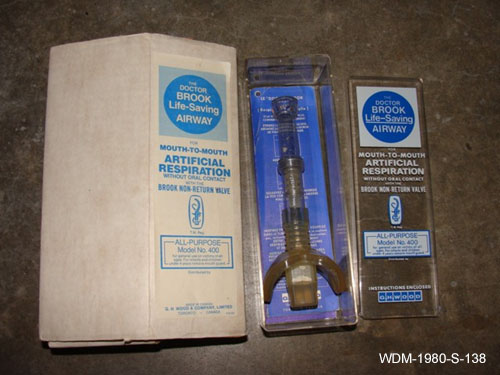 This month’s artifact feature is the Brook Airway resuscitator. Invented by Saskatoon doctor Morris Brook and his brother Dr. Joseph Brook, this item was patented in 1959. It was developed to provide an easier and more sanitary way to provide mouth-to-mouth resuscitation. The resuscitator had a non-return valve to protect the person providing mouth-to-mouth. A tube helped hold the recipient’s airway open even in awkward positions and also held the tongue out of the way.

The inspiration for the invention came in 1957 when brothers Dr. Morris Brook and Dr. Joseph Brook were called to assist in a cave-in at a potash mine. Dr. Morris Brook gave mouth-to-mouth resuscitation to a man who was covered in dirt and blood, and he was inspired to find a more sanitary way to provide treatment. His Airway was designed to clip on to a miner’s helmet, which would keep it close at hand at all times and be readily accessible in the event of an emergency.

CPR (Cardiopulmonary resuscitation) was a first-aid method that became popularized in the 1960s. It has two main components: mouth-to-mouth ventilation and chest compressions. The mouth-to-mouth aspect of CPR was not a new development. Records show it being used in the 18th century. It became less popular when germ theory became accepted in the 19th century. Once people knew about germs they began to worry about transmitting them to one another. Mouth-to-mouth slowly regained popularity in the 20th century, and the first documented successful use of mouth-to-mouth resuscitation in modern times was in the 1950s, when an American anaesthetist, James Elam, successfully revived a patient.

Concerns about hygiene are one of the major barriers to people performing mouth-to-mouth on others, which is where the Brook resuscitator comes in. It prevents air or saliva from the patient coming into the mouth of the person helping them and prevents lip-to-lip contact. Newer methods developed in the 1980s and 90s have since made the Brook Airway obsolete, but it was an important innovation in the development of lifesaving techniques.