Artifact Feature – Newspaper and Postcard from the First World War

November 11, 1918 marked the official end to the First World War. After over four years of fighting, more than 60,000 Canadians had been killed and 172,000 were wounded. The social fabric of Canada had notably changed. Returning traumatized veterans needed assistance adapting to civilian life. Women who had been welcomed into the wartime workforce wished to continue work outside the home, altering the traditionally accepted family structure.

Canada was also left to come to terms with, and later make amends for, its wartime treatment of “enemy aliens,” people who were mostly recent immigrants from countries at war with Canada. Many were interned in camps or lost rights (such as the right to vote) during the war due to their perceived affiliation with enemy nations. The war also led to Canada’s increased autonomy from Britain, clearly indicated by Canada signing the Treaty of Versailles independently from Britain. 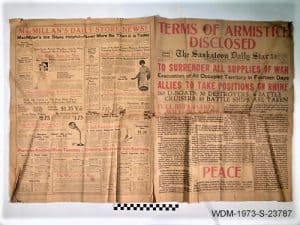 The First World War changed many aspects of Canadian society, and its impacts are still remembered over a century later. To mark the anniversary of the end of the First World War, this month’s artifact features are armistice-focused artifacts from the WDM Collection.

First is the front page of an extra from the Saskatoon Daily Star. This edition, from November 11, 1918, announces the terms of armistice and the end of the First World War. Inside the paper are also articles about the Spanish Flu’s increasing case numbers and obituaries for those who died from the Flu. 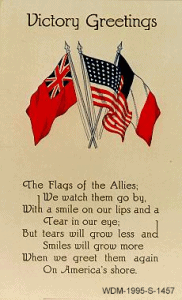