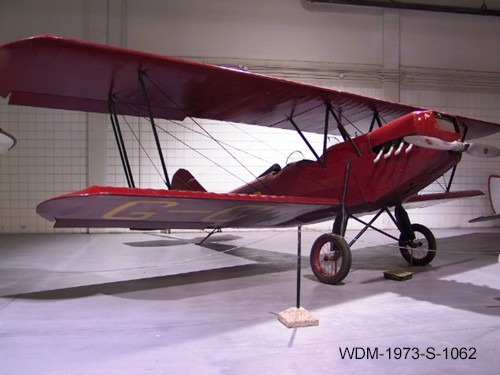 The Red Pheasant H-10 Type 36 aircraft on display in the aircraft gallery of the WDM Moose Jaw is the only known Red Pheasant in Canada and the oldest known aircraft in Saskatchewan.

Built in 1927 by the Pheasant Aircraft Company in Memphis, Missouri, it was soon purchased by Norman Cherry, co-founder of Cherry Airways, the first airline in Prince Albert. The airline also provided the first airmail service to Prince Albert.

The Pheasant Aircraft Company was founded in Memphis, Missouri, in 1927, and the first Pheasant aircraft took flight in August of that year. By December 1927, nine aircraft had been manufactured, including this one, and by the end of 1928, they had produced 30 planes. The company moved to Wisconsin in 1929, and was eventually acquired by the Dayton Aero and Engineering Co.

When this aircraft was purchased by Norman Cherry, he flew it from Memphis to Saskatoon in a 14-hour flight. It was originally used as a “barnstormer,” a plane that would fly stunts and sell rides to curious passengers. When the Cherry Airways company was formed later that year, it was used to transport passengers around Saskatchewan.

In 1930, Cherry sold this Pheasant to the Northern Aero Company of North Battleford, but the company went bankrupt in 1931. Marcus Caldwell, manager of Northern Aero, purchased the plane from his company and flew it privately until 1931, when it was damaged in an emergency landing during a flight between North Battleford and Cut Knife.

The aircraft was eventually dismantled and stored in a North Battleford garage until it was obtained by the WDM in 1950. It was restored by 406 City of Saskatoon Auxiliary RCAF Squadron in 1961. The work was completed in 1964.

We invite you to visit the Red Pheasant at the WDM Moose Jaw and learn more about Saskatchewan’s fascinating history of aviation!