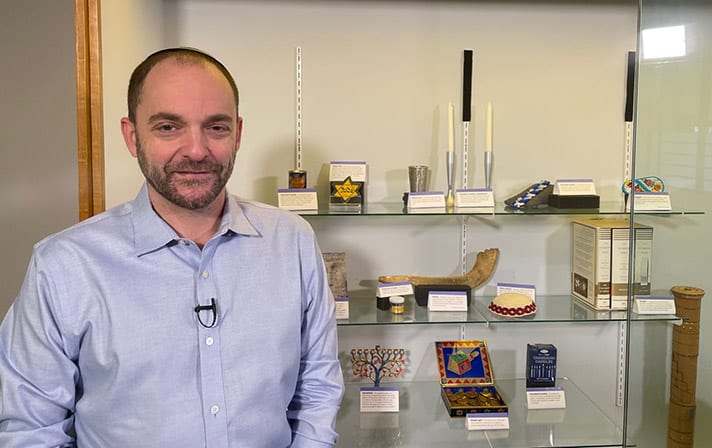 May is Jewish Heritage Month.

Judaism is an ethnicity, culture and religion that traces its origins to over 4,000 years ago in the Mediterranean area known as the Levant. Judaism has evolved and adapted to coexist with the cultures and communities in which Jewish people live. This has led to a great diversity of Jewish traditions and customs from the Sephardi Jews’ culture rooted in Spain to the ancient community of Black Ethiopian Jews.

Jewish people around the world have shared holidays, history and rituals that date back hundreds or thousands of years. These communities all trace their roots back to the Five Books of Moses, which make up the Torah.

The Jewish year follows the Hebrew calendar, which is lunar-solar. Months follow the moon. To keep festivals in the same season every year, leap months are added. For example, Passover is always celebrated in the northern hemisphere’s spring.

Purim (14th of the month of Adar)
A festive and joyous holiday, Purim marks the day when the plot of Haman to destroy the Jews of Persia was foiled by Esther and her cousin Mordechai. To celebrate, people exchange gifts of food, dress up in costumes, donate to charity and listen to the story of Esther.

Passover (15th to 22nd of the month of Nisan)
Passover (Pesach) celebrates the liberation of the Jews from Egypt. It is one of the most important holidays in Judaism outside of the High Holidays. Matzah, a cracker-like food made of flour and water, is eaten instead of leavened bread to remember that the Jewish people fled Egypt without time for their bread to rise.

This holiday is marked by the seder, a long ritual meal that includes the story of the exodus from Egypt, songs, and eating symbolic foods. Seders are held on the first night of Passover in Israel and on the first and second nights everywhere else.

Yom HaShoah (27th of the month of Nisan)
Though most Jewish holidays are ancient in origin, there are modern observances as well. One of the most solemn is Yom HaShoah, Holocaust Remembrance Day. This day is to remember the lives of the 6 million Jews murdered in the Holocaust. It is distinct from International Holocaust Remembrance Day, which remembers the lives of all 11 million victims of the Holocaust.

As a modern holiday there is no single way to commemorate this day. Many communities invite Holocaust survivors to speak, while others observe formal mourning traditions.

Shavuot (6th of the month of Sivan)
Shavuot is a holiday that commemorates the day the Torah was given at Mount Sinai. This holiday is marked by reading the Book of Ruth and staying up late studying. Milk products are commonly eaten.

Tisha B’Av (9th of the month of Av)
Tisha B’Av is said to be the saddest day in the Jewish calendar. Many tragedies in Jewish history occurred on this day. The most notable were the destruction of both the First and Second Temples in 586 BCE and 70CE respectively. As a day of mourning, it is traditional to fast.

Rosh Hashanah (1st to 2nd of the month of Tishrei)
“The Head of the Year,” or the Jewish New Year, marks the beginning of the High Holidays, which are the most sacred days in the Jewish calendar. To wish for a sweet year, sweet foods are eaten: apples dipped in honey, pomegranates and challah (bread) baked with raisins. Round foods are also popular and symbolize the cyclical nature of time.

Yom Kippur (10th of the month of Tishrei)
Yom Kippur, the Day of Atonement, is a day of prayer and fasting at the end of the High Holidays. Jewish tradition states that the book of life and death for the coming year is sealed at the end of Yom Kippur.

Sukkot (15th to 21st of the month of Tishrei)
This holiday is named after the huts Jews are supposed to live in for this week. These temporary structures symbolize the huts the Jewish people lived in while wandering in the desert for 40 years after escaping Egypt.

Hanukkah (25th of the month of Kislev to 3rd of the month of Tevet)
Perhaps one of the most well-known Jewish holidays, Hanukkah is the festival of lights, celebrating the victory of the Maccabees against Roman invaders and the miracle of one jar of oil burning for eight days. To celebrate, a nine-branched menorah or Hanukkiah is lit each night for eight nights.

Shabbat
Though most Jewish holidays happen once a year, the sabbath, Shabbat, is celebrated every week. From sundown on Friday to sundown on Saturday, Shabbat is observed as a day of rest.

Shabbat is welcomed by lighting candles, eating challah and drinking wine. At the end of Shabbat, the Havdalah ceremony is performed to greet the new week. A special braided candle is lit, blessings are sung, then the candle is extinguished.

Photo above: Rabbi Claudio Jodorkovsky. Rabbi Claudio was born in Santiago, Chile. After studying in Argentina and Israel, he received his rabbinical ordination in 2002. In 2003 He moved to Colombia, and in 2005 he became the rabbi of a 200 family congregation there. After nine years in Colombia, he and his family came to Saskatoon, where he became the rabbi for Congregation Agudas Israel.

Rabbi Claudio holds a BA in Management for Non Profit Organizations and an MA in Jewish Education.