An illuminating time piece: Shining a light on radium in museum artifacts 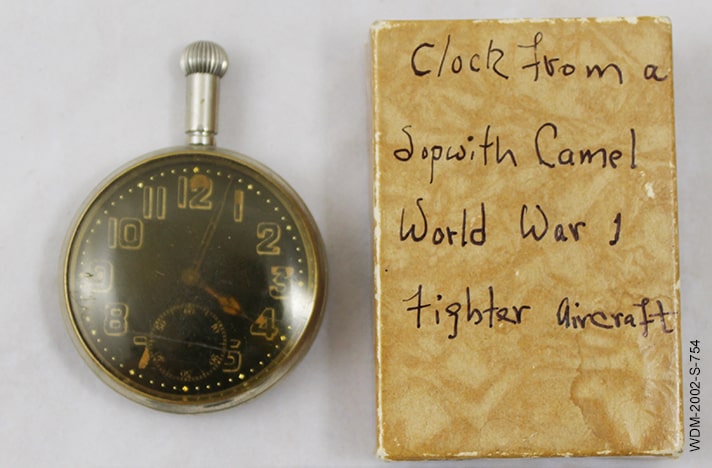 Upon discharge from a military hospital, pilot William Clarence Johnston received his personal effects, recovered with him from a plane crash site by stretcher bearers in the middle of the Somme Battlefield in September 1917. Unexpectedly among the items he received back was a pocket watch that was not his. He kept it as a souvenir the rest of his life.

Johnston was then discharged from the military and returned to Canada, passing the watch on to his son as a memento of the air battles he fought against German air pilots, including Manfred von Richthofen, The Red Baron. The watch was kept for years by the family without knowing what other secrets it held.

The watch itself was not any different from other watches with the same mechanisms and faces. It even had the popular illuminated dial, a feature that disguised a potential killer under its plastic cover – radium.

William C. Johnston became a pilot in 1916. He paid for his own air training in Ontario before he enlisted in the Canadian Expeditionary Forces as a pilot. He was transferred to the British Navy as there was no Air Force at the beginning of the war. Airplanes were first only used for reconnaissance missions. By 1916, they were fitted out with machine guns, used to prevent air raids and deter enemy reconnaissance.

Johnston was sent on flying missions over London with his partner Captain Arthur Roy Brown, intercepting German Fokker Bombers headed for London. He was flying a joint mission with Brown in November 1916 when Johnston was shot down over the English Channel with neither parachute nor life jacket. He crashed into the water and was able to extricate himself from the wreckage and started swimming. Captain Brown, flying overhead, notified a nearby French destroyer that retrieved Johnston from the water 45 minutes after his watery crash.

After his rescue, Johnston returned to the air in a new plane, which he crashed in early 1917. In August 1917, Johnston and Brown were posted in No. 9 Naval Squadron and fitted out with brand new planes, Sopwith-Camels, each equipped with a luminous dial pocket watch.

Each Sopwith Camel airplane was equipped with an illuminated pocket watch that hung on the dash by a clip. The watches enabled pilots to better coordinate battle strikes since there was no radio communication once planes were in the air.

Shortly after receiving the new aircraft, Johnston found that the clip for his luminous dial pocket watch was faulty. As such, he started carrying the watch in his uniform pocket. In 1917, Johnston and Brown started flying patrols over the Somme sector of northern France, shooting down German enemy aircraft. It was over this sector on one September flight that a German fighter was able to hit Johnston’s plane, causing Johnston to crash in no-man’s land near the allied trenches. He was injured in the crash. Before stretcher bearers could recover him from the wreckage, the German army had deployed a chlorine gas attack on the same sector.

The stretcher bearers were able to make their way to the wreckage and extracted Johnston from the site shortly after the attack and took him to the nearest field hospital, where doctors stabilized him before he was transferred to the General Hospital farther away from the front lines. At the General Hospital the doctors determined that he would need more medical attention and he was sent to England. After much treatment in hospital, Johnston was able to recover. However, his injuries were too severe for him to be redeployed to active service. He was discharged from the military and transferred back to Canada. His personal effects were returned to him before he left for Canada. In the bundle of clothes, he found the pocket watch with the luminous dial.

In 1898, when Marie and Pierre Curie discovered radium it was considered a new wonder element, effective in the treatment of cancer. The other uses of radium were unforeseen by the Curies but as the discovery spread people conceived of brilliant, and not so brilliant, uses for it. Radium was seen as a miracle curative with long reaching health benefits. It was these magical healing properties that attracted people to it, prompting others to produce new products from it, cashing in on a new health craze. Many different types of products appeared on the market claiming to harness the healthy properties of radium. From shirt collars to salts, toothpastes, cosmetics and even corsets, the manufacturers all made claims that they contained radium. Radium was found to glow in the dark and was used on theatre and vaudeville posters. Radium even inspired a dance craze in 1904.

Radium’s ability to glow in the dark was a fascinating feature to people living at the dawn of the electric age. The majority of the population still lit their homes by candlelight and gas lamps. Radium appeared as a magical element, glowing without any source of energy. As radium didn’t rely on anything to glow, it was viewed as a safety element and as such was painted onto clock faces and dials so they could be read in the dead of night or in dark areas.

Clock companies in England, United States and Canada all started to produce luminous clocks. The companies hired young women to paint luminous radium paint onto the faces of the clocks. These women would take the tips of their brushes and place them between their lips to create a fine point, then dip their brushes in the radium paint and brush it onto the clock face, often repeating the move many times.

These women were known as the “radium girls” and were among the first to suffer from one of the negative effects of radium, a condition called aplastic anemia. As radium enters the body it is treated as calcium and as such is deposited into the marrow of the bones. The radium disrupts the production of blood cells and over time deteriorates the bones until they are brittle and can no longer provide support to the body. These women workers developed a condition called radium jaw, where their faces became disfigured from the prolonged exposure to and deposits of radium.

During the First World War, the ill effects of radium were still not widely known. The presence of radium on the watch was unknown to Johnston and his family, and even to early Museum staff. Further research revealed that because the watch was made by the Ingersoll Watch Company, a company known to paint radium on its dials, using a Geiger counter to detect radium levels would be useful.

The Geiger counter confirmed what was suspected – the micro sieverts (µSv) were recorded as being over 500 µSv, almost the equivalent of a modern abdominal x-ray. For reference, the accepted daily exposure limit is 5.0 µSv.

Today the watch is not accessible to visitors and, to protect staff, has warning labels affixed to prevent unnecessary exposure to the radiation emitted by the watch face. The watch was also exposed to a black light and there is still some fluorescence coming off the watch, over a century after it was painted. Though not all the numbers and dials illuminate anymore the radium is still present and will be present for many centuries to come. As conservators we are faced with many challenges in caring for artifacts like this one, balancing preserving it for the future with adhering to modern safety protocols.