The Great Adventure and Its Great Consequences 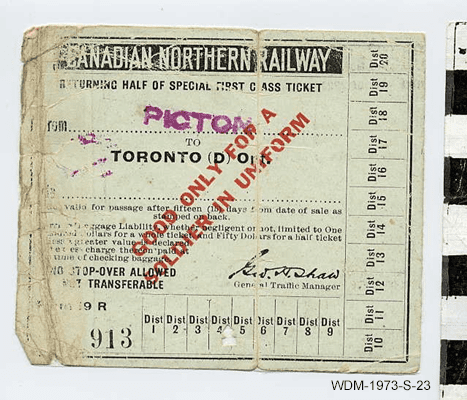 Over the course of the First World War, more than 40,000 men from Saskatchewan enlisted in the war effort. There were several factors that encouraged them to sign up. Propaganda and social pressure encouraged eligible men to “do their bit” for King and Country. Many of them were first and second-generation Canadians who still felt a strong connection to the British Empire. There was also an element of excitement to the idea of travelling overseas. In an era before commercial flights, and in a province where many settlers were self-employed as farmers and could not take time away, signing up to fight in the war was a rare opportunity to travel and see a different part of the world. Private J.A. Gunn wrote in a letter home on November 6, 1918, “yes, [Fort] Qu’Appelle is a pretty place, and I remember it quite well as I was born there: before I had seen much of the world I used to think that the hills were very high, but years, and travel, changes many things does it not?”

However, the war proved more miserable and dangerous than many imagined it would be when it began, in part due to advancements in the technology of warfare. Approximately 6400 soldiers from Saskatchewan died in the war, and many of those who survived lived with physical and mental trauma that altered the course of their lives. In the same letter, Pte. Gunn wrote, “[my fellow soldiers and I will] often think of many of the boys that went with us on the great adventure, and who will not return…” By the time this letter would arrive in Saskatchewan, the armistice had been declared, and the First World War had finally come to an end.

Abby Vadeboncoeur is a Curatorial Assistant – Intern at the WDM. She is working on a furniture assessment project, where she examines and researches artifacts that the WDM has in storage to consider how they fit into the WDM’s Collections Development Plan. She is in the final stages of completing her master’s degree in history. For the past two and a half years, she had been studying how the First World War affected people in rural Saskatchewan, which inspired her to think about how integral the railway was to connecting people across Canada and transporting soldiers. She was especially excited to come across Pte. Gunn’s letter in the artifact database, because it tells us a soldier’s perspective on the war in his own words.