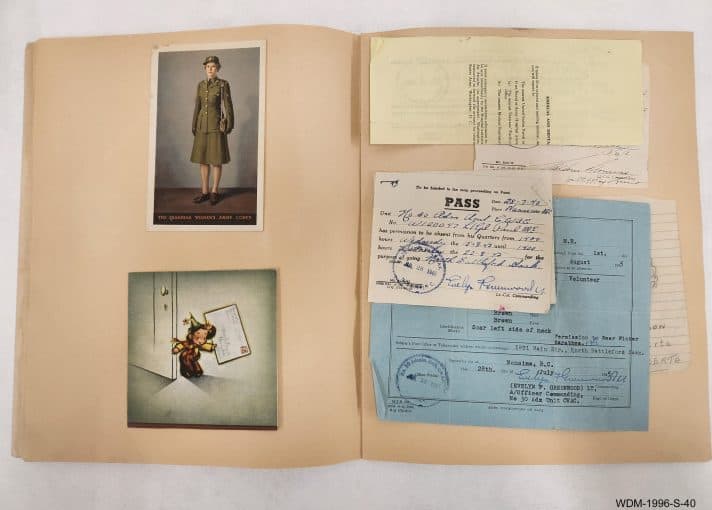 This scrapbook from the Second World War was made by Marvel Houston (née Paul or St. Paul). Marvel Paul was born in Meadow Lake and raised in North Battleford.

The CWAC was formed in 1941 by a group of women who argued that in a “total war” like the Second World War, all Canadians should have the opportunity to serve, not just men. The men in charge were skeptical of bringing women into any form of military service outside of nursing, raising concerns about what would happen to families if both parents went off to war.

The need for more labour was ultimately what convinced the men in charge to create the CWAC. Women were permitted to take over support roles to free up men to fight on the front lines. Though it was called an “army corps,” initially the women were not officially part of any branch of the Canadian military, were not subject to military discipline, and did not follow army military ranks. This changed in 1942 when the CWAC was officially integrated into the Canadian Army. After that point, women and men were in the same ranking system.

Recruits were trained in three locations. Kitchener, Ontario, Vermilion, Alberta, or Sainte-Anne-de-Bellevue, Quebec. In 1943, the first members of the CWAC were sent overseas, first to England and later to Italy and Belgium.

To enlist in the CWAC, women could have no dependents and were subject to strict health requirements. Women in the CWAC did everything from cooking and laundry, to deciphering codes and vehicle maintenance.

In 1951, Marvel married Erle Houston and moved to his farm near Ruthilda (a village which was officially dissolved in 2013). In the 1970s, Marvel became interested in archaeology after finding various artifacts on her farm. In 1976 she joined the Saskatchewan Archaeological Society and served as President of the Society from 1982-86. She also sat on the Board of the Biggar Special Care Home and served as Mayor of Ruthilda. She passed away on June 10, 1995.