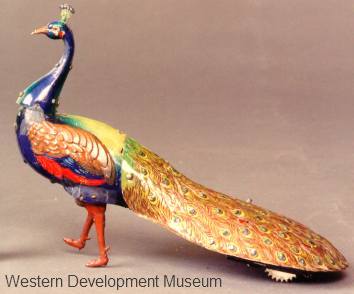 In A Prairie Attic: Bladon Family Toys is the Western Development Museum’s intriguing exhibit of early 20th century toys and games from the Bladon family of Lang, Saskatchewan. Who were these people? How did their toys survive some 80 years and seven children?

The story begins in 1910 when A.R.(Dick) and Rilla Bladon and their six young children boarded the train in Illinois and headed for a new life in Saskatchewan. They crossed the border at North Portal on a dry, dusty spring day, heading for land along the SOO Line, about 10 miles northeast of Lang in southeast Saskatchewan. The family, along with their horses and cattle, got off the train at Yellow Grass, the nearest station to their destination. The farm was still 15 miles away.

Years later, Bill, one of the six children who made the trip from Illinois, wondered what his parents must have thought as they surveyed what he described as the “distance that was never ending till it met the blue sky.”

In many ways, the family was typical of American immigrants to the Last Best West; they desired farm land for their sons, they came by train bringing their livestock and belongings in a boxcar, and they were experienced dryland farmers. They had many advantages over most European immigrants.

In other ways, however, the Bladon family was different. For nearly 75 years, the large two-storey house they bought in 1920 from a neighbour, was home. Four brothers, Harold, Carl, Buck and Bill and their sister Eva, lived there for the rest of their lives. Only two children, Arthur and Mildred, married and left home. Arthur, who farmed nearby, had only one child, a daughter Audrey. Mildred had no children.

Fortunately for the Western Development Museum and for the people of Saskatchewan, the family were savers. When Bill, the last of the five siblings who lived on the farm, died in 1994, his executor recognized the treasure that was hidden away in the family home and the WDM was contacted.

Museum staff made the trip to Lang in 1995 and were delighted with what they found. Tucked away in the attic and verandah were dozens of toys, children’s books, games and playthings of all description. Remarkably, many of the toys were in their original boxes. Games had no missing pieces and storybooks were almost new. There were even unopened store-bought Christmas stockings.

Boxes and trunks held machinery company trade literature from companies long forgotten. A lifetime accumulation of documents and papers told the story of farming in the province, and traced the lives of the Bladon family through nearly eight decades. To say that the WDM was interested was an understatement!

The WDM acquired more than 1,700 artifacts from the Bladon home in addition to several hundred farm machinery company pamphlets, booklets, and advertising materials. The real treasure, however, was toys.

Months went into cataloguing the collection. Each artifact was documented and photographed. Eaton’s catalogues from the teens and early 1920s provided illustrations, descriptions and prices.

Exhibit planning began in 1997. Because so many of the artifacts had been stored away in the farm house attic, the WDM chose to present the collection in a structure that suggests the look of an attic. There are over 300 artifacts in the exhibit; more than 200 are playthings. There are dolls and doll furniture; tea sets and cooking toys; storybooks and board games; card games and puzzles; mechanical wind-up and farm toys; trains and toy guns; building sets and jack-in-the boxes. The toys date from 1910 to 1920 and are typical of what mail order shoppers could buy from Eaton’s.

Children’s books are featured throughout the exhibit. Their colourful covers must have delighted their young owners. Stories range from educational themes, which often taught religious or moral principles, to adventure tales written for entertainment and relaxation.

Artifacts were also chosen to tell the story of the Bladon family–their lives at home, as farmers and as community builders. WDM staff was privileged to meet Mildred Bladon Rea, the youngest of the Bladon children, who was born in Saskatchewan in 1910. Mildred shared memories of family life with her parents, five brothers and sister Eva. Visitors to the exhibit can hear her reminisce.

The WDM invites you to come and enjoy a close-up view of toys from generations past. You will have fun looking at the toys and will gain awareness of what it was like to grow up in Saskatchewan in the teens and 1920s. A self-guided tour booklet will enhance your understanding of the exhibit.