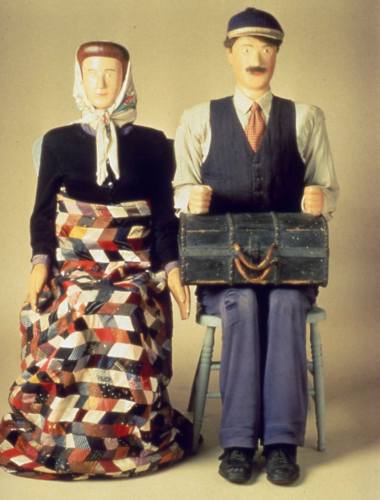 Victor Humeniuk and his girlfriend lived an ocean apart for most of their lives, but two carvings in their likeness now sit side by side.

Humeniuk, who lived near Fenwood, Saskatchewan 50 km southeast of Yorkton, carved life-sized figures of himself and a woman out of a single poplar tree in 1936, shortly after he immigrated to Canada from Krywiezy, Poland. Humeniuk’s stepdaughter, Olga Wilk, said the female figure was carved to resemble the girlfriend that Humeniuk left behind when he moved to Canada. He never saw her again. Humeniuk was married briefly in the 1960s, but lived alone most of his life. He died at age 84 in 1976.

The carvings, on display at the WDM Yorkton, have eyebrows, hair and moveable joints. Humeniuk dressed the male figure in some of his own clothing.

The carvings were separated before Humeniuk’s death when he gave the male form to neighbours. Bill Matichuk received the carving, recalling how it often startled visitors.

“We used to keep it on the porch, and people would get scared because he looked so real,” Matichuk remarked.

He said his family decided to donate the sculpture to the WDM, but did not know the whereabouts of the other figure. “We just thought it would look better in the Museum,” Matichuk commented.

Humeniuk left the other carving with his stepdaughter, Olga Wilk, who said she also donated it to the WDM Museum without knowing that one of the pair was already there. “I didn’t know about it, but I guess we were just thinking the same thing,” she said, “It’s good that the two are together.” 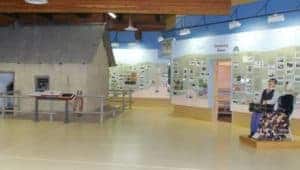 The figures are among the WDM’s most popular artifacts. They were featured in a book about Canadian museum collections, Significant Treasures. Ruth Bitner, former WDM Collections Curator, said the carvings were chosen because of the story they represent. “They tell a story of separation, of moving to a new country and leaving loved ones behind,” Bitner stated.

Fortunately, they now tell their poignant story together.