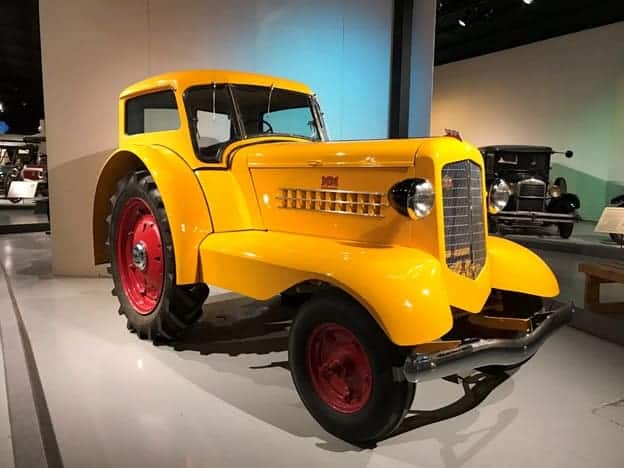 The name said it all: The 1938 Minneapolis-Moline Comfortractor claimed the convenience and safety features that are now standard in farm tractors. Its only drawback? The Comfortractor arrived 30 years too soon.

Brad Clark’s father bought a 1938 UDLX Comfortractor  (WDM-1981-S-197) for his farm near Ardath, Saskatchewan, 70 kilometers south west of Saskatoon in 1941. The mustard-colored machine boasted the first closed cab on a farm tractor. J. Foster Clark bought the Comfortractor so he could farm 24 hours a day.

The avant-garde tractor came with an equally novel list price of $1,900 USD, almost double what farmers would pay for a standard tractor of the day. His son remembers that the tractor caused a stir in the community when he was growing up. “It was the talk of the town,” he recalls. “But it was like things are today – some people were delighted to see it, while others had some animosity, thinking about how they had to sit out in the wind and the rain.”

The Minneapolis-Moline company built about 125 Comfortractors from 1938 to 1940. The four-cylinder model featured an electric starter, upholstered seats, adjustable windows, a radio, heater, brake light and even a cigarette lighter. The Comfortractor was designed for night farming, with a spotlight on top of the cab and a lighted panel for the driver. But in the 1940s, the Comfortractor was the only light in the fields.

“About three or four o’clock in the morning, you could get one radio station from the States – it was really quiet, but it was good company out there,” says Clark. One of the other features of the Comfortractor was an overdrive gear that allowed it to travel up to 65 kilometers per hour on the highway. Salesmen from the Minneapolis Company used to drive the tractors from Saskatoon to Kindersley, Saskatchewan.

“But the tractor had poor steering at these speeds so the government safety inspectors made them take out the overdrive,” recalls Clark. The narrow wheel base of the tractor made it unsteady at high speeds. On the road or in the field, his father put over 34,000 kilometers on the machine.

The Comfortractor is currently on display at the WDM Saskatoon.