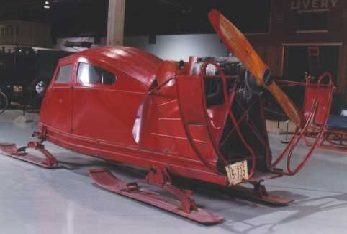 A snowplane is much like an early model of a snowmobile. In Saskatchewan, before snowplows and elevated highways were common, roads would easily become blocked with snow in the winter. Looking for ways to overcome the often harsh realities of the Saskatchewan climate, some people turned to snowplanes (likely called such because of the large propeller on the engine, reminiscent of an old plane propeller). Some would be homemade while others were store bought. This is a 1949 snowplane built by Fudge Snow Sedans of Moosomin, Saskatchewan.

Robert Fudge built his first “snow sedan” in 1929. Three years later he began building units for sale. Between 1932 and 1956 when production on the Fudge Snow Sedan ceased, Fudge had built about 400 units. He claimed that the “tear drop” design on his model offered minimal resistance while permitting all-around vision.

This machine (WDM-1973-S-1063) was owned by D. A. Cunningham of Kipling, Saskatchewan. It seats four people, and Mr. Cunningham used it from 1949 to 1956 for a variety of purposes: driving to town, to take a United Church minister on his round of country churches, to transport people to hospital, and for pleasure. See it today at the WDM Moose Jaw.