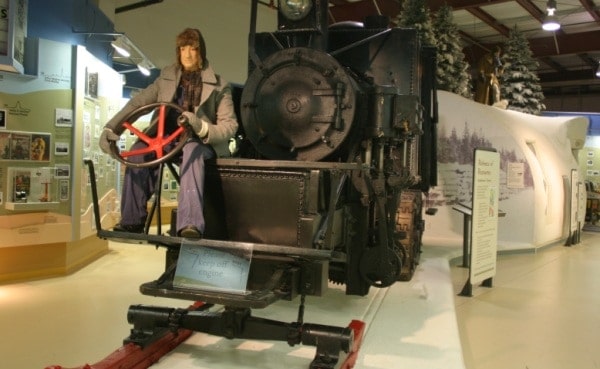 Back in the first decade of the 20th century, steam-powered log haulers were the latest innovation in the lumber industry. The Phoenix Manufacturing Company of Eau Claire, Wisconsin built these machines beginning about 1904. They were based on 1901 patents by Alvin Lombard of Maine. Phoenix paid Lombard a $1000 royalty on each machine. A Phoenix publication stated in 1910, “The Steam Log Hauling Locomotive, although only in use a short time, has proved a success beyond all expectations, making it possible to move 200,000 feet of logs every 24 hours while the same amount of money invested in horses would only move 50,000 feet in the same time.”

The Phoenix Centiped is a Shay-style locomotive mounted on endless tracks. It was made to haul seven to eighteen heavily loaded logging sleighs over snow or ice roads. Each Centiped was outfitted with a set of skis on the front. The 100 horsepower four-cylinder engine operated at 200 pounds of steam per square inch. The log hauler burned either wood or coal–at least one and a half tons of good coal for a ten-hour trip. Water for the boiler was needed every four or five miles. It took three men to operate the Phoenix – the engineer, the fireman and the pilot. The pilot or steersman was perched at the front of the machine, far from the warmth of the firebox, to guide the skis. Sometimes a rough shelter was built to protect him from freezing. To keep the engine running 24 hours a day, a second crew often travelled along in a caboose.

According to the March 5, 1908 edition of the Nor’West Farmer, the Sturgeon Lake Lumber Company introduced the Phoenix Centiped log hauler to its operations in 1905. The paper went on, “The Sturgeon Lumber Co. employs the unique train…in bringing lumber from its mill to Prince Albert, a distance of 30 miles. The engine is the only one of its kind in Canada, and its achievements are creating considerable interest among lumbermen. This engine was purchased in the early part of 1905 to do the work which had previously been done by mule teams…The winter of 1907 was the most severe in the history of the West. Despite these very adverse conditions, this engine did its work in a most satisfactory way. The usual load hauled for a distance of thirty miles between the mill and the city market is 150,000 feet.”

The Sturgeon Lake Lumber Company was pleased with the machine’s performance. Writing to the Phoenix Manufacturing Company in 1909, it reported, “Our engine has worked steadily this winter. It has been out all day, and sometimes all night in a temperature varying from 30 below to 55 below zero. We are at present hauling loads of 80,000 feet of green rough lumber a distance of 60 miles per day. There are some heavy grades upon the road which we find the engine climbs well. The regular train consists of seven loaded sleighs, a large tank of water, and a heavy caboose for the crews….We consider the engine is doing the work of 40 four-horse teams.”

In 1912, the Ladder Lake Lumber Company bought a Phoenix for use in its Big River area logging operations. It is not clear whether this was the same machine bought new by the Sturgeon Lumber Company in 1905. A few years later, The Pas Lumber Company bought out Ladder Lake and moved the Phoenix to the Pasquia Forest reserve east of Carrot River, Saskatchewan. We do not know how many steam-powered log haulers operated in Saskatchewan between 1905 and the early 1930s. It is thought that The Pas Lumber Company had at least six, two of which are now in the Western Development Museum collection. A total of eight Phoenix Centiped log haulers are known to have survived – two in Wisconsin, one in Iowa which came from Saskatchewan, one in Alaska and two in Finland.

A Phoenix (WDM-1973-NB-60) was restored for exhibit at the WDM North Battleford. It is featured in the 100 Years of Saskatchewan History exhibit. We invite you to visit and see this rare machine from the heyday of Saskatchewan’s winter logging camps.