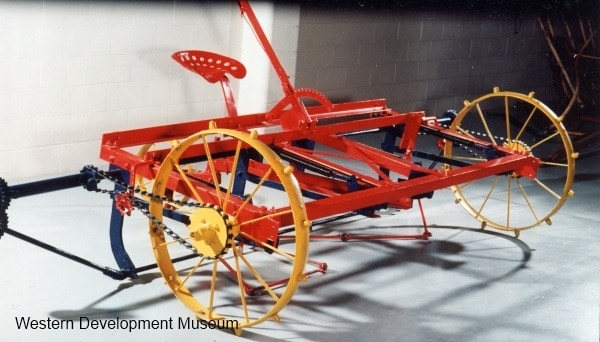 George Morris was known to say that his 1929 rod weeder was just the “right thing at the right time.” His progressive invention came not a moment too soon.

It was the dawn of the “Dirty Thirties” when George Morris patented a horse-drawn device that could uproot weeds with minimal disruption to the top layers of the soil. Morris embraced the concept of minimum tillage, which was not widely practiced by farmers at the time. Most changed their minds as they watched clouds of dry soil swirl from their fields during the Depression.

In 1930, George Morris sold his first Morris rod weeder to a farmer at Goodeve, Saskatchewan for $148. That sale launched what was to become one of Canada’s largest family-owned farm equipment companies. In 1951, George Morris located and bought back one of his early rod weeders (WDM-1973-Y-2834) and donated it to the Western Development Museum, where it is on display at the Yorkton WDM. He died in 1989.

Norman Roebuck of Yorkton was a long-time friend of Morris and is a fellow member of the Saskatchewan Agricultural Hall of Fame. Roebuck remembered when Morris first began to build the rod weeders at a tiny garage in Bangor, southeast of Yorkton.

“They were very primitive conditions where he was working,” said Roebuck. “It was a small-town garage. I remember he came on horseback to my dad’s place to sell his rod weeder.” 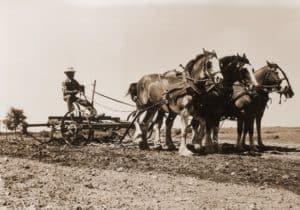 George Morris was born in Bangor in 1904. He attended motor mechanics school in Winnipeg in the 1920s, and returned home to run a garage and tractor dealership. Among the equipment he often fixed were rod weeders.

In the 1920s, conventional rod weeders were horse-drawn machines with a cylindrical steel rod that was dragged several centimetres underground. The rod rotated as it moved along and uprooted,

But machines made in other parts of North America were no match for some Saskatchewan areas of stubborn, rocky soil. When the steel rods hit stones, the rods often snapped or bent out of shape.

George Morris redesigned the rod weeder and patented a model with a special automatic “trip” mechanism in 1929. When the steel rod hit a rock, it would spring to the surface of the soil and miss the obstacle before automatically plunging into the ground once more.

Dr. Ron Ford, a retired professor of agricultural engineering at the University of Saskatchewan and a WDM supporter, explained that the rod weeder “was a response to provincial needs” to limit drifting soil.

“A lot of Saskatchewan has fine, silty soil and it is easy for the wind to get a hold of it,” said Ford. “The rod weeder gave good weed control with minimum disturbance of the trash cover on top of the soil,” he explained. With the soil’s cover intact, moisture wasn’t sapped as quickly and land remained productive.

Large equipment companies ignored Morris’ invention at first, but it was very popular with prairie farmers. In this 1930s, the rod weeder was manufactured at Portage La Prairie, Manitoba, and in 1949 Morris officially opened the Morris Rod-Weeder and Equipment Company in Yorkton, where it still operates as Morris Industries today.

George Morris continued to have an interest in inventions throughout his life, and he created other machines including a rotary snow blower. He held 15 Canadian patents for his various inventions.

Norman Roebuck recalled that Morris was always interested in finding ways to improve designs made by his own company.

“He used to call at dinner time and we’d go out into the field,” said Roebuck. “He liked to have a look at how things were working and maybe take a picture,” he said. “Even when we’d travel in places in Australia, we’d visit a lot of factories.”

George Morris’ contribution to Saskatchewan agriculture has been recognized through many awards, exhibits, and tributes. He is always noted as an innovator who encouraged better farming through his entrepreneurial spirit.