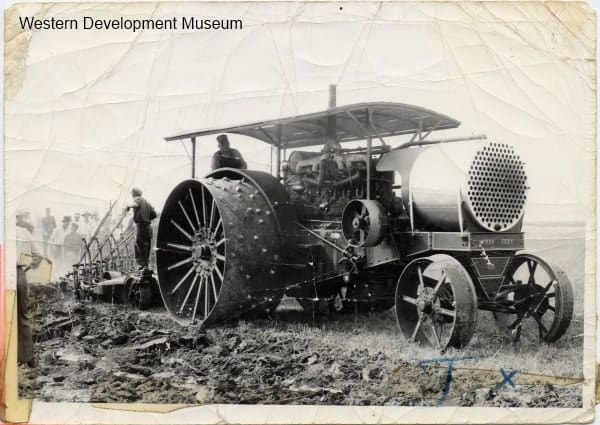 Twenty-eight thousand pounds of steel; seven-foot drive wheels; 60 horsepower on the drawbar—that was the Twin City 60-90 HP tractor, the biggest, most powerful tractor of its day according to its maker, the Minneapolis Steel & Machinery Company (MS&M). The Twin City was named after Minnesota’s “twin cities,” Minneapolis and St. Paul, where the company was founded in 1902. The roots of the company go back a few years earlier in American industrial history.

When MS&M was formed in 1902, and for the next eight or so years, MS&M was primarily a steel fabrication company. Sensing opportunities in the flourishing farm machinery business, company officials in 1910 hired the Joy-Wilson Company to design a tractor. The Joy-Wilson design eventually became MS&M’s popular Twin City 40. For a short time, MS&M also built tractors on contract for J.I Case, the Bull Tractor Company, and in 1914 signed a deal with the Grain Growers’ Co-op in western Canada to build the Twin City Twentieth Century tractor.

By 1913, MS&M had an impressive tractor line—the Twin City 60, the largest of their “heavyweight” tractors, and the smaller Twin City 40, Twin City 25 and Twin City 15. The line was shown to the public at state fairs in the United States and at fairs in cities like Winnipeg, Brandon, and Regina. MS&M boasted that the Twin City 60 was the “most powerful oil tractor in the world.” Its six-cylinder motor had a 7 ¼ inch bore and 9 inch stroke. Overall, the behemoth Twin City 60 was nearly 22 feet long, 9 1/2 feet wide and stood just over 10 feet tall. The drive wheels were 30 inches wide. The kerosene fuel tank held 95 gallons. All Twin City models burned kerosene, gasoline or distillate “equally well.” A company catalogue described the Twin City 60:

“This is a tractor of great power. In fact, as far as we are able to learn, it is the most powerful oil tractor on the market today. Its drawbar pull represents the united pulling force of 60 good horses. Its motor running alone will develop over a hundred horse power. It is a marvel of strength and energy, and is, of course, fitted only for unusually heavy work. This machine is being used with great success in plowing the Mesquite lands of Texas and on big farms, both for plowing and threshing where power in large units can be used economically.”

The March 11, 1914 Grain Growers’ Guide, published in Winnipeg, carried a full–page ad headlined “A Move in Line with the Spirit of the Times.” MS&M pitched a “Direct from Factory to Farm” sales plan, cutting out the salesman and the dealer. The company also promised “the best service…in the tractor business” from its general office in Winnipeg and branch operations in Regina, Saskatoon and Calgary. “The purchaser of a Twin City tractor is assured that he will always be taken care of, and that behind every machine stands a company that is one of the very strongest in the business. We are building more tractors than any company in the world.”

Tractors like the Twin City 60 were well beyond the reach of the average farmer. Only someone who farmed on a large scale could afford the price tag, some $6,000.00 in 1917. Custom plowing and threshing were also done with big outfits like this.

The heyday of monster plowing engines like the Twin City was relatively brief. By the late teens, much of the agricultural land in Western Canada and the United States had been broken and there was less demand for tractors that could pull a 10 or 12 bottom plow. Also, about this time, dozens of tractor company hopefuls were experimenting with smaller, less expensive and more efficient machines. By 1920, MS&M stopped building the Twin City 60 and by the mid 1920s, their lightweight models had taken over.

The Western Development Museum is the proud owner of a very rare Twin City 60, acquired in the late 1950s. Few, if any, other examples of this tractor are known to have survived. The Twin City 60 was purchased originally by Carl Melin about 1917 and shipped from Minneapolis to Minot, North Dakota, by train. From Minot, the tractor was driven some 60 miles across the prairie to Parshall where Melin used it for harvesting the 1917 crop.

In 1918, Melin rigged up two locomotive headlights and a 32 volt Delco light plant which drew power off the tractor pulley. One lamp was mounted on the front of the Twin City, the other on the back. The Twin City ran almost non-stop for 28 days and nights pulling a 12-bottom plow and packer, stopping only to fuel up or change plow shares. Melin’s crew broke several thousand acres of sod and built many miles of roads in the Parshall area.

In 1926, Melin loaded his outfit, including a cookhouse and 500 gallon fuel tank, on two railway flatcars and headed for Saskatchewan to do custom threshing. His crew of 22 men, a cook and assistants came along. When they got to the border, the machinery was unloaded and driven across, reducing the amount of duty owing.

After the 1926 harvest, Melin sold the outfit to brothers Henry and Edward Anderson who were part of his crew. The Andersons had decided to stay in Saskatchewan and bought land in the Estevan area. They used the Twin City 60 for only three more years. When the Depression struck, the Andersons “let the land go in the drought years.”

The Twin City 60 (WDM1973-Y-931) at the WDM Yorkton was restored in 1980 under the direction of Wendall Anderson, a descendent of the Anderson brothers. Be sure to stop in at the WDM Yorkton to see this most impressive and rare tractor giant.