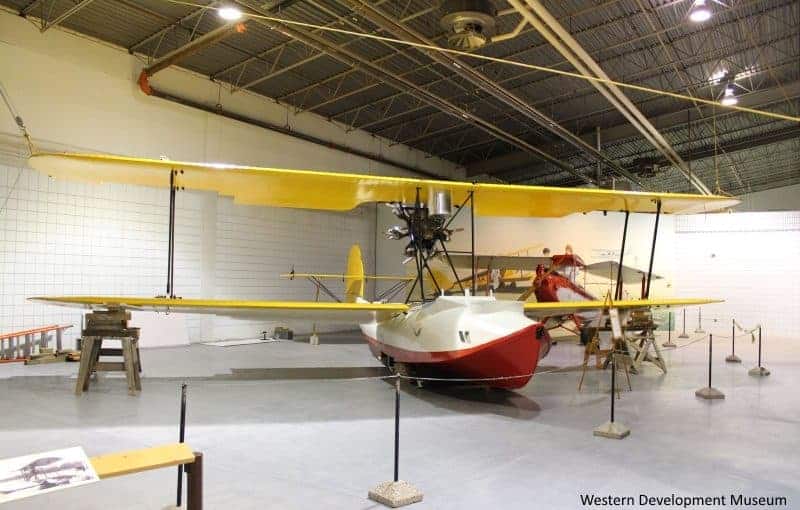 When the Royal Canadian Air Force (RCAF) needed an airplane for aerial mapping and forest fire patrols in Canada’s north, it turned to Canadian Vickers, a boat building company in Montreal. Canadian Vickers built the first Vedette in 1924. Another 60 followed in five different versions. It was the first commercially mass-produced aircraft to be both designed and built in Canada.

In 1933, the province of Saskatchewan purchased five Vickers Vedette planes from the federal government for a total of $1 (yes, just one!). The planes were used in northern Saskatchewan for fires and to survey the land. Of the five purchased in Saskatchewan, only two were in flying condition. The province planned to repair the other three. The last plane was retired in 1941.

The Vickers Vedette looked like a boat with wings designed to take off and land in the water, making it ideal for exploring the lake-filled regions of northern Saskatchewan. The biplane had a wooden hull and an open cockpit. The passenger sat in front of the pilot. The engine was mounted pusher-style behind the pilot with the propeller facing the back.
No complete Vedettes have survived, but the hull of one of the Saskatchewan-owned aircraft can be seen at the WDM Moose Jaw, along with a replica built by WDM volunteers. The hull was retrieved from a forest in 1990 by Saskatchewan Parks and donated to the WDM in 2003.

In 2014, the Vickers Vedette replica won a Ninety-Nines Canadian Award in Aviation for promoting and preserving aviation and aeronautics history in Canada. The Vintage Aircraft Restorers (VAR) group in Moose Jaw contributed an incredible 23,328 hours over a ten-year period to the project.