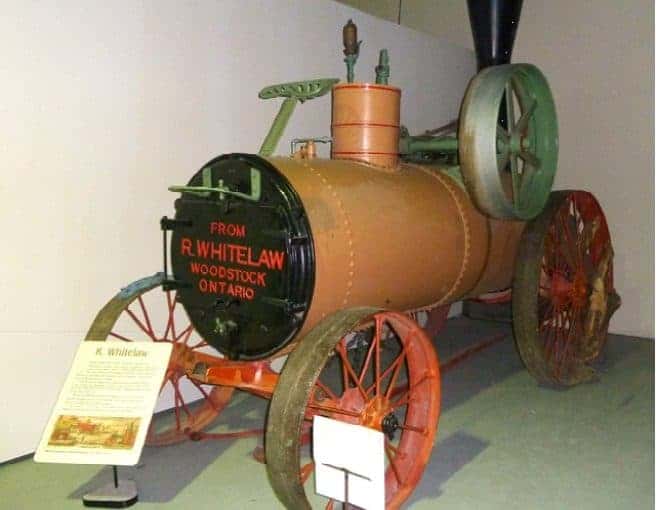 This R. Whitelaw Portable Return Flue Steamer (WDM-1973-S-313) was originally purchased in 1892 in Hamiota, Manitoba. Eleven years later it was sold for $500 and moved to Creelman, Saskatchewan, where it was in operation for another nine years. In 1912 it was retired, as it was too small to be effectively used. This steamer had no driving gears or steering wheel, it was made to be pulled by horses or oxen.

Little is known about the R. Whitelaw Company of Woodstock, Ontario. The engine in the WDM collection is believed to have been built at Whitelaw’s Oxford Foundry and Engine Works in the early 1890s. The company built agricultural engines, threshing machines and engines used in bakeries, creameries and cheese factories in Ontario.

After it was retired, it was left for 50 years behind an outbuilding on a family farm, until it was donated to the Western Development Museum. By the time it was offered to the WDM, a tree had grown through the drive wheel! The Manitoba Maple was estimated to have started growing in 1930 and was 30 years old when it was cut to remove the steamer. Part of the tree can still be seen in the wheel today. It’s on display at the WDM North Battleford.