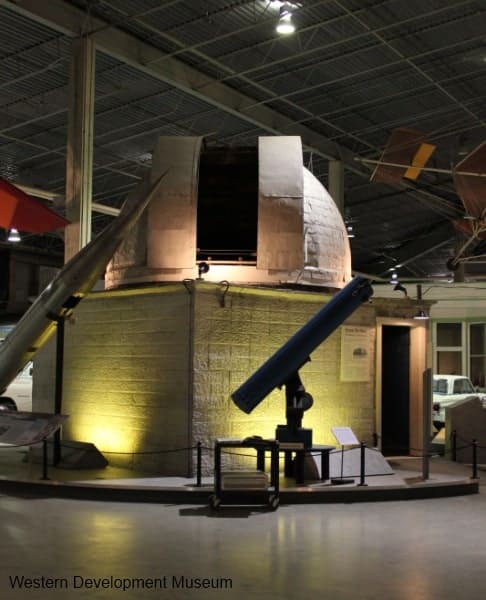 The stars have guided travellers for thousands of years. Observatories house equipment used to study the stars.

Inspired by the impending return of Halley’s Comet in 1910, a group of Regina amateur astronomers formed the Saskatchewan Astronomical Society. In 1913, an observatory, the first of its kind in Western Canada, was built on the roof of Regina Collegiate, later called Central Collegiate. It was Regina’s first high school and operated from 1908 to 1985.

The observatory excluded light from outside sources and provided a wind-free environment. The domed roof was light, easy to turn and its height accommodated a long telescope. The building was unheated because air turbulence affected the image. Red lights were used inside because red light does not affect the human eye’s adaptation to the dark.

The Society was active for a number of years until the First World War when membership declined. Maintenance of the observatory was neglected, and in 1938 it was removed from the Collegiate’s roof and sold. After the Second World War, the Society revived again, eventually as the Royal Astronomical Society of Canada, Regina Centre. The Society regained ownership of the observatory in 1983 and in 1989 it was moved to the Moose Jaw Western Development Museum.