Spanish Flu in Saskatchewan: 1918-19 A virtual exhibit based on the Spanish Flu exhibit at the WDM Saskatoon. 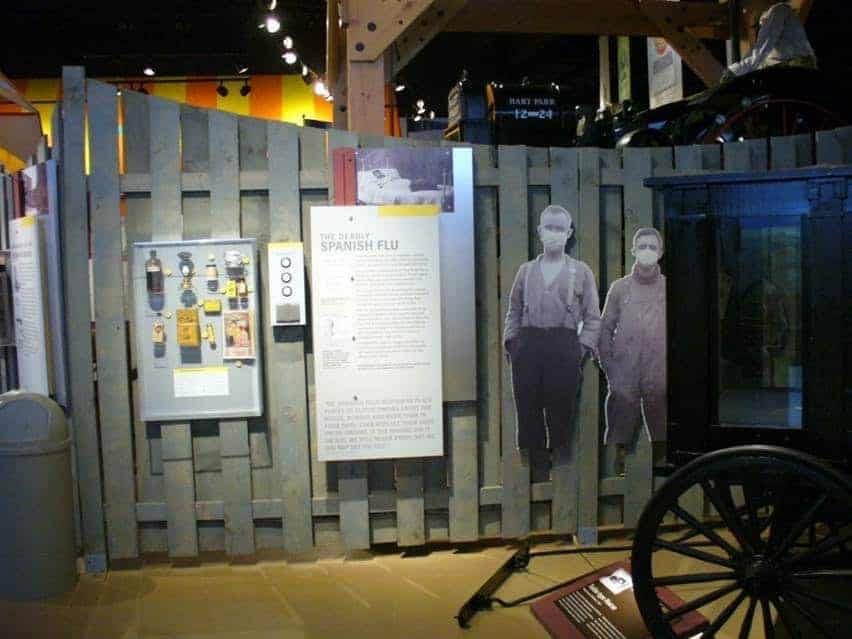 Spanish Flu in Saskatchewan: 1918-19
A virtual exhibit based on the Spanish Flu exhibit at the WDM Saskatoon.

The history of the Spanish Flu pandemic of 1918-19 is more relevant today, more than 100 years later, than perhaps any time since. We invite you to explore this online gallery featuring history, artifacts and sound clips of Saskatchewan stories during the 1918-19 Spanish Flu pandemic.

We’ve even expanded some portions of the exhibit to include additional artifacts in the WDM Collection that help us better understand the impact of the 1918-19 influenza pandemic on Saskatchewan people. The original exhibit can be found in the 100 Years of Saskatchewan History exhibit at the WDM Saskatoon.

We recognize this is not a comprehensive history of the Spanish Flu in Saskatchewan. Rather, it is a sampling how people coped, what they worried about and how they persevered. We recognize that not everyone’s histories are represented here. There is great need for more research on the impacts of the Spanish Flu in First Nations and Métis communities in Saskatchewan. Historians do know that the pandemic had devastating effects on Indigenous communities, exacerbated by colonial policies that already contributed to lower social determinants of health.[1]

The “Spanish” Flu was named as such not due to its actual origin in Spain, but rather because the first press reports that emerged about an influenza epidemic on the Western Front near the end of the First World War came out of neutral Spain. This created the impression the spread had started there. Later in the 20th century, epidemiologists determined the “Spanish” flu of 1918-19 was what we now know as the H1N1 strain of influenza.

1918 Saskatchewan. The First World War finally ended in November, but the jubilance that peace brought was countered by the devastating impacts of the outbreak of Spanish Flu. The war and the flu were intimately connected, with returning soldiers being carriers. The illness highlighted the disadvantages people living in rural areas faced in trying to obtain healthcare. Rural hospitals were few and far between, and many communities had no doctor and no means of treating the disease. While the flu didn’t discriminate who it infected, those living in poverty often fared worse as their access to hospitals and doctors in the decades before Medicare lessened their chances of survival.

The flu pandemic claimed the lives of over 5,000 people in Saskatchewan. Most recorded deaths occurred by the end of 1918, but the flu didn’t truly wane as a pandemic until May 1919. It was particularly deadly for young people aged 20 to 40 years old. Many children were orphaned during the pandemic because of the high number of lives claimed in their parents’ age bracket.

The Spanish Flu is estimated to have killed between 50 and possibly as high as 100 million people worldwide – 50,000 people died in Canada.

If the 1918-19 influenza pandemic experience was all-consuming, it is not evident in the local headlines of Saskatchewan newspapers. The first mention of the Spanish Flu in a Saskatchewan newspaper was on October 1, 1918 in the Regina Leader. For a global pandemic, the news coverage is comparatively light to that of Covid-19. This may have been due to the end of the First World War dominating the headlines with news from overseas. After four long and unexpected years at war, it is easy to see why.

An article, dated October 18, 1918 in the Saskatoon Daily Star, shows the public’s resolve in fighting the flu. Much like the current Covid-19 Pandemic, public health officials urged Saskatchewan residents through news outlets to remain calm, follow public health orders and commit to working together to curb the flu. Household cleanliness, personal hygiene and refraining from coughing in public were all recommended. Other articles and notices called for those who were healthy and trained in nursing to provide their services on the front lines. Physicians, nurses, family members and volunteers all cared for the sick. While much of this caring took place in hospitals, the home was the site of most people’s recovery or death. Newspapers also reported on the number of reported cases of influenza each day

To explore more of these stories, visit the Provincial Archives of Saskatchewan’s curated collection of newspaper articles that discuss the flu in 1918-19 online.

Though it was a difficult time in Saskatchewan’s history, the pandemic brought about positive changes in health care policy and delivery across the province. Rural municipal doctor programs, where a municipality would pay the wages of a doctor to keep him in the community instead of individual farmers paying for medical treatment when necessary, were a precursor to nation-wide Medicare. Doctors’ salaries rose. Vaccines gained popularity. The establishment of rural hospitals became a priority for communities. Courses on the medical care of children were developed in the 1920s to help isolated rural women care for their families. These improvements in care generally had a positive effect on quality of life, although for the working poor, recent migrants and Indigenous communities, access to health care remained largely inequitable.

Not only were rural communities unprepared for the pandemic due to the lack of available healthcare, but common treatments were often out of reach. Alcohol was considered one of the best treatments and preventative medicines for the Spanish Flu, but prohibition was still in effect. In a desperate attempt to treat the flu, the provincial government permitted pharmacists to dispense alcohol if they deemed it necessary. For communities without a pharmacist, this did little good. The lack of adequate healthcare meant that death rates from the flu in villages and rural areas were nearly twice as high as the death rates in urban centres in Saskatchewan.

Nine artifacts are featured here, the same ones on display at the WDM Saskatoon, that illustrate different treatments, “cures” and advice in treating and managing the symptoms of the flu during the Spanish Flu pandemic. 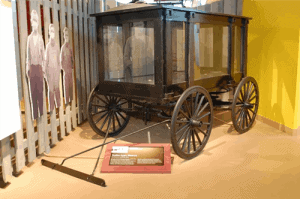 This vehicle served in the Cupar district of Saskatchewan both as a hearse and as an ambulance to transport flu patients from their homes to the hospital during 1918-19. Gatherings such as church funerals were prohibited due to the contagious nature of the flu. Therefore, many funerals were held in private homes. This hearse carried those who died to a home where the service was held, and then to the cemetery. Most hearses were horse-drawn, but this hearse was pulled by a motor vehicle.

The hearse was in service west from Markinch to Southey, east to Dysart and Lipton and as far as the Fort Qu’appelle area. It was used constantly from 1914 to 1946, and occasionally from 1946-1949 at which time funeral coaches replaced this type of hearse. The hearse is on display at the WDM Saskatoon. 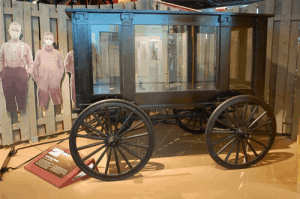 These three stories are based on true events and memories from real Saskatchewan people who lived through the Spanish Flu. Listen and remember their struggles and strength.

More than any other factor, what got people through this challenging time was the spirit of community and the tireless efforts of medical professionals. Just as we honour them today, nurses, doctors, public health officials and other medical professionals fought the front lines of the 1918-19 flu and helped people recover.

One of those people was Catherine MacKay. Catherine Gardner MacKay (nee Connell) was born in 1894 in Iowa. She married in 1913 and came to Aberdeen, Saskatchewan, returning to Iowa to have her two children. She divorced her first husband in 1916, a rare occurrence for women during this time and returned to Aberdeen in 1918. There, she worked as a nurse with Dr. Holmes during the Spanish Flu pandemic until she contracted pneumonia. In 1919, she met and married widower Dugald MacKay and farmed and lived in the Aberdeen area. Catherine died in 1986.

As a nurse, Catherine would have witnessed the speed with which the flu could claim its victims. You could be fine in the morning and succumb to the illness by evening. Approximately 1 in 4 families were infected. Catherine wore this nursing apron as she cared for flu patients in Aberdeen. Her job would have been hard. Long days and nights characterized by much suffering and sadness. But also, hope. Catherine, and others like her, embody the Saskatchewan spirit that saw the province through this difficult time in its history. We thank them then and now for their service.