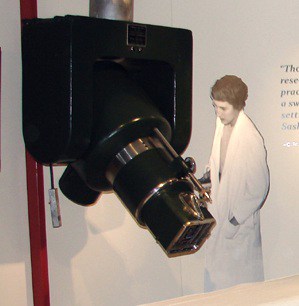 The Cancer Bomb exhibit features the original Cobalt-60 Beam Therapy Unit, also known as the cobalt bomb, and honours the inspiring story of the first successful treatment of cancer with this machine at University Hospital in Saskatoon in 1951.

The WDM considers the cobalt bomb to be one of the most important artifacts in its collection. This machine, and others like it, has saved the lives of millions of cancer patients around the world. This is very much a Saskatchewan – and a Saskatoon – story.

Saskatoon’s cobalt unit treated 6,728 patients until it was replaced in 1972, first by another cobalt radiotherapy machine, and later by a linear accelerator. By the 1960s, the cobalt-60 machine was standard equipment for radiation therapy world-wide. These machines are still in use in many developing countries that previously did not have the necessary resources for good radiation therapy.

“Though born of war-time nuclear research, the cobalt bomb was in practice a ploughshare rather than a sword…. With its flair for trend-setting performance in medicine, Saskatchewan had led the way.”
– C. Stuart Houston and Sylvia O. Fedoruk in A New Kind of Ray, 1995

Find out more about the Cobalt-60: