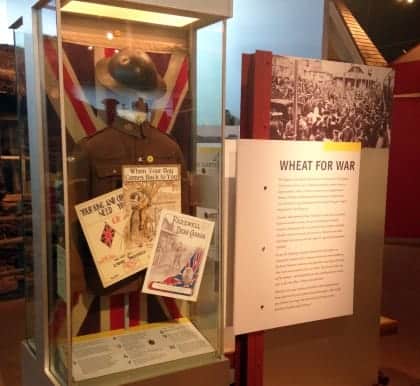 On August 4, 1914, Britain declared war on Germany. This meant Canada, too, was at war. Canadians joined the armed forces in large numbers. Many of these volunteers were Saskatchewan farmers. Women, children and the unemployed stepped in to run the farms. In 1915, Saskatchewan harvested the largest crop in the province’s short history.

Canada’s allies needed wheat. As the price rose, more and more land was seeded to wheat. In 1917, the federal government created a marketing body to control the sale of wheat and fixed the price at three times the pre-war price. But prices for farm machinery also went up and the wages for agricultural labourers doubled.
In 1917, the federal government introduced conscription or compulsory military service because more men were needed on the front. Farmers, however, were granted an exemption because their work was essential to the war effort. By the end of the war on November 11, 1918, Saskatchewan had contributed over 40,000 men to the war effort. Nearly 5,000 had died.

After the war, many veterans returned to their Saskatchewan farms and tried to pick up their normal lives again. But would any of them ever forget the horrors they had seen in the trenches of north-eastern France?