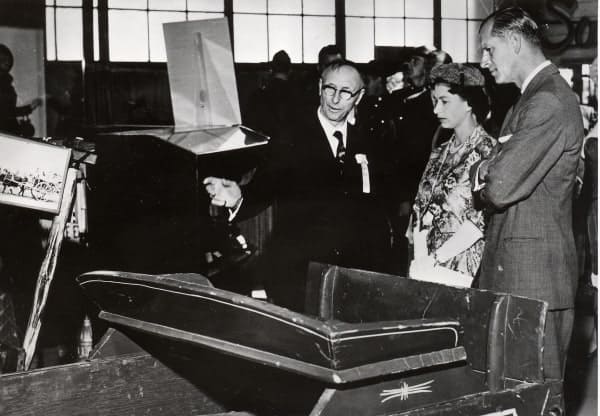 Life came full circle for George Shepherd. Born in Canterbury, England on March 20, 1890, George Shepherd and his father immigrated to Canada in 1908, settling near Davidson that fall. The following year, his mother, sister and five brothers joined them in Canada.

In 1913, Shepherd took up a purchased homestead 80 km (50 miles) south of Maple Creek. The land there nourished his interest in the early history of the Mounted Police and Fort Walsh. Working with the late Commissioner Stuart Taylor Wood, Shepherd helped with the purchase of the fort for raising police horses. As a part of the community of cattlemen in the Cypress Hills, his knowledge of the history of the West grew.

In 1927, he married Irene Thompson, the couple eventually celebrating the arrivals of two children, Gordon and Eleanor. After years of ranching and farming, in 1950 Shepherd and his family retired to Saskatoon and quickly became active in the life of the city and the nearby university. “This was a drastic uprooting. It meant saying farewell to the open prairie and the smell of sage, the free and large life of the range. It meant leaving loved and respected friends,” wrote Shepherd in his book West of Yesterday (page 142).

Three years after moving to Saskatoon, Shepherd was made curator of the fledgling Western Development Museum, housed in a re-assembled Second World War hangar on 11th Street West. “In August of 1953, I was offered the post of Curator of the Western Development Museum in Saskatoon. …I think I would probably have paid my new employers to let me work there,” (West of Yesterday, page 144).

There, he greeted many thousands of visitors, including Her Majesty Queen Elizabeth and the Duke of Edinburgh in 1959.

In 1965, Shepherd published his first book, West of Yesterday, followed in 1967 by Brave Heritage. He also authored many articles in Western Canadian History for a variety of periodicals and magazines.

In 1972, when the WDM Saskatoon moved from 11th Street West to Lorne Avenue, the Museum’s collection of library and heritage resources was officially named the George Shepherd Library. George altered his bus route, but not his routine, arriving every weekday morning at the new Museum, anticipating his day of greeting visitors from near and far.

George Shepherd grew to love his adopted country, the depth of its history and the breadth of its stories. He befriended fellow history buffs wherever he went, forging a fast friendship with Mark Hutton, an American historian who sent a weekly package of books and pamphlets from Tennessee that Hutton thought would be of interest at the Museum.

In recognition of his years of service to Saskatchewan, George Shepherd was presented with an Honorary Doctor of Laws in 1976 by the University of Saskatchewan. In 1977, he received an Honourary Scroll from the Government of Saskatchewan. He was honoured that same year when a seniors’ high-rise at 525 24th Street East in Saskatoon was named Shepherd Apartments.

Until 87 years of age, Dr. Shepherd arrived faithfully at the Museum five days a week, ready to greet visitors and share stories of Saskatchewan. In October 1977, he said farewell to Museum work. He died on February 19, 1978.

On March 18, 1981, the Shepherd family and the WDM celebrated the launch of the George Shepherd Memorial Fund, to perpetuate the memory of Dr. George Shepherd and his contributions to the Western Development Museum. Interest from the fund was to be spent annually on library acquisitions, particularly old and rare books and catalogues pertaining to Western Canada.

As curator of the Western Development Museum for more than 20 years, Dr. George Shepherd safeguarded the history he lived and helped to create and share the stories of Saskatchewan’s past with visitors from around the world. In West of Yesterday, writing of his work at the Museum, he claimed “My pioneer experiences, my historical researches, and my writings certainly gave me valuable background. But the truth is I was home once more: at home in a world I loved. After forty-five years, events had come full circle” (Page 144).