Hunting for Radioactivity in the Western Development Museum 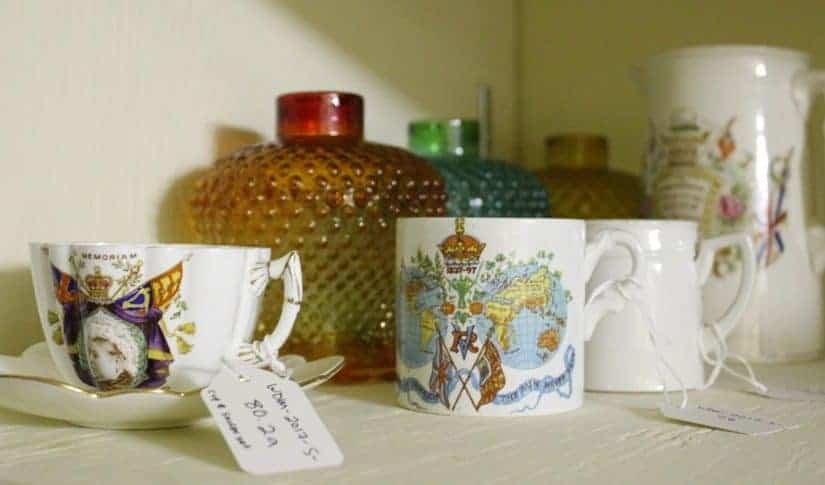 If you stopped a random stranger on the street, and asked them to name a source of radioactivity, chances are they might respond with an international nuclear accident site like Chernobyl or Fukushima, or perhaps the fallout from nuclear weapons testing. If you work in a museum though, you would be able to inform them that some of the most common radioactive objects are actually household items like pottery and glassware produced in the early 20th century.

While many of us picture the atomic age beginning with nuclear bombs and atomic power stations, scientists were actively engaged with nuclear research much earlier than the Second World War. At the turn of the century, Marie Curie conducted ground-breaking studies that resulted in the isolation of the radioactive element radium. Occurring in very small concentrations in particular ores, radium quickly became the most expensive element in the world by weight. By the 1930s, several refineries in Belgium, Canada and the United States processed mountains of ore to sell mere grams of radium. These precious particles were then used in cancer treatments and luminous dials on watches, instruments and compasses.[1] These radium treatments, however, were not nearly as effective as later developments such as the Cobalt Bomb developed in Saskatchewan and on display at the WDM Saskatoon.

As a by-product of radium processing, refineries also produced uranium oxides. Before the advent of nuclear weapons production, there were very few applications for uranium, except for use in pottery and glassmaking. Ceramics and glass manufacturers used uranium oxides to colour their wares because uranium was a cheap waste product. Uranium in glassmaking often produced a pale green color, while uranium added to ceramic glaze produced a brilliant orange colour. However, artists were able to create black, grey and ivory colours from uranium as well. The orange-glazed pieces, especially, were popular throughout the 1930s and were produced to compete with similar dinnerware sets manufactured in the United States. As a result, they are a common sight in antique stores and museums across Canada.

It should be no surprise that a number of these objects would find themselves in provincial human history museum collections like the Western Development Museum (WDM), particularly because many were produced right here on the prairies at Medicine Hat Potteries. An afternoon search of the collection storage areas at the WDM Corporate Office with a Geiger counter yielded a plate and a cream pitcher  in an electric orange hue (better known as “fiesta red”). The red color was achieved by adding uranium oxide in the glaze and measurements have indicated that, by weight, up to 14 % of the glaze might be uranium.

While the normal background radiation in Saskatoon is anywhere from 0.06 to 0.12 microsieverts an hour, the uranium-glazed ceramic plate caused the Geiger counter to read over 38 microsieverts an hour. For context, continual contact with this plate for an hour is the equivalent of receiving two chest x-rays. While this is not enough to cause radiation sickness, prolonged exposure to any unnecessary radiation is not recommended. Radiation is similar to mercury exposure in that dosages are cumulative over a lifetime. In the case of ceramic plates and cups, the United States Environmental Protection Agency cautions that kitchenware made with uranium is unsafe for eating and drinking. Not only because of the radioactivity, but because uranium, like any heavy metal, will slowly leech into the food or drink that comes into contact with it.

While no one would be eating off of or drinking out of these artifacts, it is important that they are appropriately managed for the health and safety of the artifacts themselves, the collection as a whole and staff. Proper safe storage is key. To properly store the radioactive ceramics, museum staff designed Nutricore boxes to store each piece. The boxes were lined with polyethylene, acid-free tissue paper was used to support the plate and a polyethylene mount was made to support the pitcher. Lastly, appropriate labels, pictures of the artifacts and “radioactive material” signs were attached to each box. The plate and pitcher were returned to the storage areas and placed on the lowest shelf against an outside facing wall.

With the beginning of the Manhattan Project in 1942, and the intense production of nuclear weapons during the Cold War, uranium supplies were no longer available for ceramics and glassware. These radioactive household artifacts remain a curious testament to the “pre-atomic” age, and quite possibly the most common source of radiation you’ll encounter.

By: Ally Forand and Steven Langlois

Ally Forand is a Masters of Museum Studies candidate at the University of Toronto. Her current research explores the importance of holistically caring for museum collections beyond the physical care of artifacts. One way she does this is through her column Breaking the Glass Case on the student blog Musings MMSt, where she is one of the two co-editors-and-chief.

Steven Langlois is a PhD student at the University of Alberta. He studies the environmental history of the Cold War, with a focus on uranium production in Canada and the United States. In this spare time, he enjoys hunting for radioactive antiques.