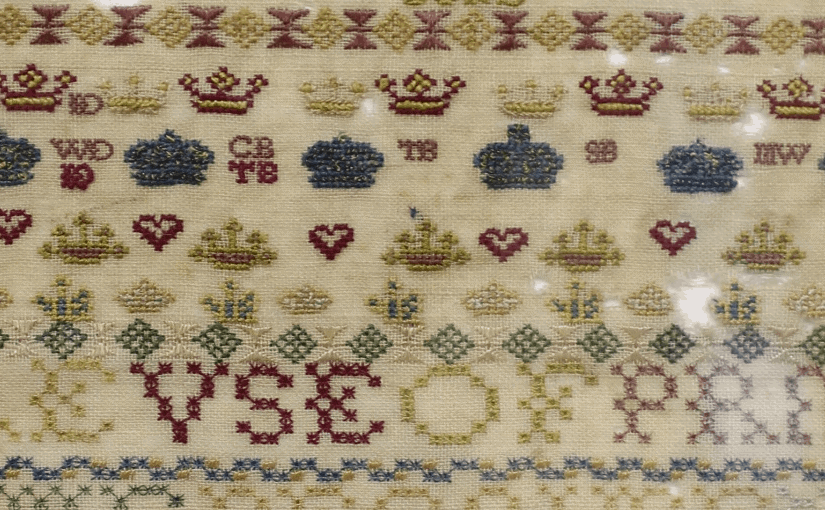 Last time, we introduced Susanna Dimsdale’s beautiful but mysterious embroidery sampler, one of the oldest artifacts in the WDM’s 75,000+ artifact collection. In this blog series, we are examining archival, textual and material clues to determining when the sampler might have been made. The provenance of the object – its chain of ownership history – is incomplete as the last known owners collected the piece in 1875 at a London antique sale rather than inherited it as a family heirloom. At some point, Susanna’s sampler was separated from her family and ended up with others who loved it all the same.

In this post, we will look at some of the symbolism in the sampler for more clues to its dating.

When the sampler was purchased in 1875 it was deemed very old. Several clues indicated its possible age. After deciphering the text in Part One of our series we can delve in a little further.

The language used in the sampler text comes from the King James Bible, which Susanna Dimsdale quotes from. Specifically, she quotes Ecclesiastes 12:1 “Remember now thy creator in the days of your youth, while the evil days come not, nor the years draw nigh, when thou shalt say, I have no pleasure in them.” She also quotes Psalm 117:1 “O praise the Lord all ye nations praise him all ye people for his merciful kindness is great towards us and the truth of the lord endureth for ever praise ye the Lord.” This usage dates the sampler later than 1611 when the King James Bible was published.

Susanna quotes a few other expressions in her sampler, including “Make use of present time, because you must take up your lodging shortly in the dust.” This quote is derived from the longer common prose:

Keep death and judgment always in your eye, none is fit to live, but who is fit to die; Make use of present time, because you must take up your lodging shortly in the dust; ‘Tis dreadful to behold the setting sun, and night approaching e’er your work is done.

Another feature on the sampler is the absence of the letters “j” and “u.” Both of these letters were absent from the English language until the mid 1700s. Throughout the sampler, any word that would today be spelled with a “u” is spelled with a “v” and anywhere a “j” would appear it is spelled with an “i.” These clues suggest the sampler dates sometime between 1611 and about 1745. Comparing this sampler to a few other samplers in the Museum’s collection that date to the 1790s, we found that the letter “u” was on all of them, but the letter “j” was still not in the alphabet. Another indication of age when comparing the samplers is the decided lack of punctuation on the earlier samplers. The samplers from the 1790s make use of punctuation and contractions.

There are not many embellishments on the sampler but there are a series of crowns, presumably depicting the crowns of England. One appears to be the Tudor crown that was destroyed in 1649 during the English Civil War. After the Restoration of Charles II to the throne of England in 1660, a new crown was made known as the St. Edwards crown, based on a crown lost by King John. The use of the Tudor crown may be an indication of the time this sampler was made.

Another feature on the sampler is a series of letters grouped into pairs and spread along a section about midway down. This appears to be a family tree of Susanna Dimsdale but deciphering it is difficult. Presuming that the lowest set of “SD” on the sampler would indicate Susanna Dimsdale, then it could be her parents are represented by “TD” and “SD.” Above that may be her grandparents. The layout is hard to determine as are the other initials.

Next time we will look at other historical sources that can help us get closer to a more precise date for the sampler.