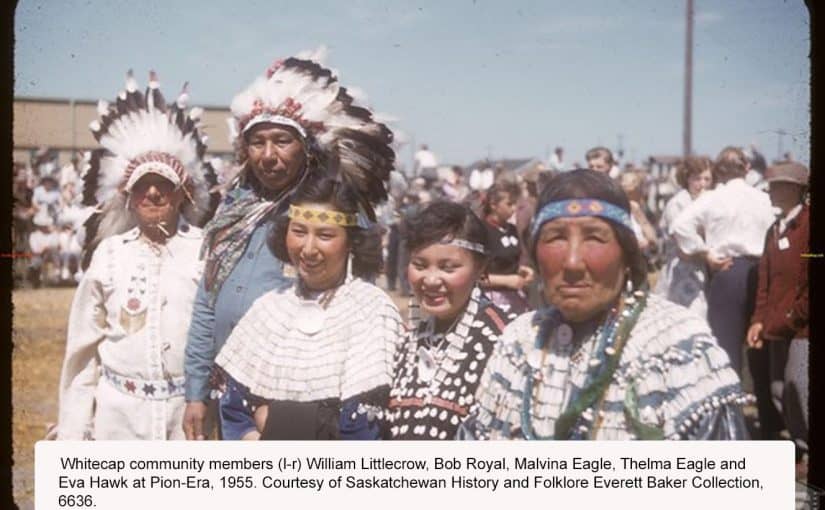 Today, to coincide with National Indigenous People’s Day and Indigenous History Month, we present a brief history of the Whitecap Dakota First Nation’s relationships and contributions to the City of Saskatoon. Considering the important conversations occurring nationally surrounding the destruction caused by the residential school system, as well as other assimilative and racist policies, we are situating the history of the relationship between Whitecap, the Museum and Saskatoon within this colonial context.

As discussions between the Western Development Museum and the Whitecap Dakota community have continued over the years, the longevity of Whitecap’s relationship and contributions to Saskatoon area have become even more clear. What is also clear is that this long-time presence in the city frames their memories of participation with the WDM at Pion-Era. But missing from the archival photographs and newspaper accounts of these events, which celebrate the Whitecap community’s presence in town, are references to the colonial controls that shaped their experiences.

Indeed, examples of colonial power imbalances are a part of the founding narrative of our city. In 1882, John Lake and others arrived looking for a location for an administrative centre for the Temperance Colonization Society. Not quite a decade before this, Chief Whitecap and his community were forced onto reserves by the Canadian government, choosing the Moose Woods area for their reserve lands.

After Chief Whitecap and his council advised John Lake on the site best suited for the colony—the initial site of the future city of Saskatoon—settlers to the area received lands that had been long occupied by Indigenous groups. These lands were previously surveyed as Métis river lots.

At a time when the daily lives of the Whitecap community were under Indian Act control, unable to access lands that provided their livelihood, vote, hire legal counsel, practice cultural traditions, gather in groups, or participate freely in the local economy, the Dakota fostered social and economic ties with their Temperance colonist neighbours. Trade with members of the Dakota community at Moose Woods saved many of the Temperance colonists from starving during their first winters on the prairies. Early settler records tell of help and supplies received from Chief Whitecap’s wife, Iyopto Wiŋ.

As Saskatoon grew, Whitecap took advantage of opportunities to share their culture with the city, albeit within the aforementioned limiting controls of the Indian Act. In the first half century of Saskatoon, the Whitecap community accepted invitations to attend the opening of the Bessborough hotel in 1935, the Royal Visit in 1939, and participated annually in the Exhibition parades since the 1930s. Accepting the WDM’s invitation to showcase their culture at Pion-Era in 1955, is another example of Whitecap’s relationship to Saskatoon.

Since 2018, the Western Development Museum (WDM) has been working to renew an historical relationship with Whitecap Dakota First Nation, centered around the Whitecap community’s participation in Pion-Era. Every summer for more than 20 years through the 1950s, 60s and 70s, Whitecap members participated in Pion-Era at the WDM Saskatoon. More about this relationship and the project can be found  in a previous blog post. CLICK HERE to read it.

Forbidden by law to practice their own cultural ceremonies on-reserve, cultural performances for the white settler community were chances to practice these traditions—even if they were in a controlled and surveilled setting. In order to leave their reserve to travel to Saskatoon for any purpose, the Whitecap community had to get permission from the Indian Agent under Canada’s pass system. While all of these activities operated within colonial systems and were fraught with unequal power dynamics, the Whitecap community participated on their own terms, asserting their nationhood and culture.

Whitecap’s contribution to momentous city events are remembered fondly by the Whitecap and Saskatoon communities alike. Acknowledging the racial inequities that shaped these moments in time does not detract from these memories, but it does bring us a step closer to understanding that race, gender, and class shape how each group experiences these moments differently. Whitecap’s history is one of the many stories of how First Nations and Métis people contributed to our shared past in the face of, or in spite of, Canada’s racist policies toward Indigenous peoples.

For many, acknowledging racial power imbalances that shaped our history can be uncomfortable. But these difficult conversations need to happen for us to move forward in understanding the truth of our pasts. Museums that work in partnership with Indigenous communities, to centre and amplify their voices, can become places to more safely have these difficult conversations, while still celebrating our shared moments of cultural prosperity and wellbeing. Over the coming year, we will be sharing more about how we are renewing the historic relationship between Whitecap Dakota First Nation and the WDM, as we continue to listen and learn about our shared past. In 2022, an exhibit featuring this history will open at the WDM Saskatoon.