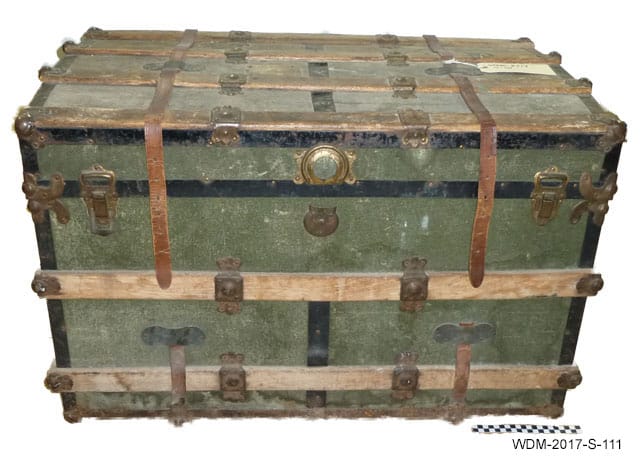 This summer we’ll be sharing a series of blog posts on Chinese history in Saskatchewan with a focus on four individuals or families and their artifacts in the WDM. The first post is on Jow Tai, his business partner Yee Clun, and the Exchange Café in Regina.

Like most immigrants, there were a variety of reasons that Chinese people came to Canada. The 19th century in China was a period of upheaval. Political instability, crowded cities, and difficulty finding work were all factors that drove people–mostly men—out of China. The promise of stable employment and rumours of gold attracted these migrants to Canada. Many of these early Chinese immigrants came to Canada with the goal of saving money for a few years and sending some money back to family, and then returning to China to be with their families. However, in reality this wasn’t always possible.

When they arrived in Canada, as early as the 1780s, Chinese workers faced severe discrimination. Most Chinese immigrants settled in British Columbia. Hostility from European settlers was intense, particularly as Chinese immigration increased in the 1850s with the Fraser Gold Rush. Euro-Canadians fought to strictly limit or ban Chinese immigration, but the railway required labourers and the railway companies could pay Chinese workers less than half what Euro-Canadian labourers were paid. Additionally, there simply were not enough people living in British Columbia at the time to build the railway quickly, so Chinese immigration was allowed. When the railway was completed, however, things quickly changed. Some men went east on the railway they had helped build, hoping to find a more welcoming home in the prairies or farther east, but finding a warm welcome anywhere in Canada was almost impossible.

Introduction of the Head Tax and Restrictive Immigration Policies

Beginning in 1885, a “head tax” of $50 was charged to every Chinese person entering  Canada, the goal being to deter or completely stop Chinese immigration. This did not slow immigration as much as Euro-Canadians hoped. So, in 1900 the head tax was raised to $100, and then in 1903 to $500. On July 1, 1923, immigration from China was effectively banned. Under this restrictive immigration policy, even British citizens of Chinese ancestry were now prevented from entering Canada.

The head tax system, and later ban on Chinese immigration, created a “bachelor society” where Chinese men vastly outnumbered Chinese women. It was prohibitively expensive to bring a wife or children to Canada from China. Euro-Canadians were suspicious of the lack of Chinese women. They also expressed racist concerns that single Chinese men would prey on young white women.

‘An Act to Prevent the Employment of Female Labour in Certain Capacities,’ 1912

After the construction of the railway, there were few careers open to Chinese people and few places willing to hire Chinese workers. Because of this, working at or running laundries or restaurants was a common career path. By the early 20th century, Euro-Canadian restauranteurs disliked the competition Chinese restaurants provided and agitated the fears of Chinese men preying on white women so much so that by 1912 in Saskatchewan, legislation was passed to forbid Chinese men from hiring white women – An Act to Prevent the Employment of Female Labour in Certain Capacities. This law, often referred to as the “white women’s labour law,” made expansion difficult for Chinese restaurants, as women were cheaper to hire than men. With few Chinese women in Canada, and unable to hire white women, Chinese restaurant owners could only hire white men, who had to be paid much higher wages. If Chinese restaurant owners could not afford the wages required to pay white men, they were unable to expand their businesses. This was a direct barrier to success.

The original Act applied to all Asian men. In 1914, it was changed to only apply to Chinese men, in part due to pressure from the Japanese government, which was a growing world power at the time. The law was amended again in 1919 to remove reference to race and instead require all businesses to apply for a license from their city or town to permit them to employ women. This made it appear on paper that things were equal, but in practice many municipalities used this legislation to prevent Chinese men from hiring white women. This law was in place until 1969.

When the white women’s labour law was passed, many noted that race is difficult to define. A challenge to the law pointed to German and Russian women existed in a racial grey area. These women were not generally accepted as members of the dominant white and largely British Canadian society, but it was hard to justify classifying them as non-white either. In response to this challenge, a court clarified the definition of “white woman” to be “a female of any of the civilized European nations.”

Though the law was popular with many, it did not go unchallenged by the Chinese community.

Jow Tai came to Canada in March 1899, at the age of 17, just before the head tax payment was increased. He was in British Columbia for 20 years, working in various roles before moving to Regina in 1919. In Regina, Jow Tai opened the Exchange Café on Rose Street with Yee Clun, where he worked until his death in 1940. Yee Clun returned to China with his family in 1932, returning to Regina in 1936, followed by his wife and children in 1941.

Jow Tai died in 1940, but his wife, Yee Leon and their children continued running the restaurant until 1947 when they relocated to Moose Jaw and opened Crescent Grocery. In 1947, Yee Clun’s family moved to Vancouver, where they lived until he passed away in 1967.

The Exchange Café and Yee Clun are most well-known in Canada for launching a challenge to the white women’s labour law. In 1924, Yee Clun applied to Regina city council for a permit to hire women at the Exchange Cafe. He had the support of a large portion of the community and a city alderman, but the Women’s Christian Temperance Union raised objections over the possibility that white girls working for Chinese men would be enticed into marrying them.

Though there was some community support for the Chinese community after these objections were raised, the objections surpassed the support and Yee Clun’s application was denied. He appealed to the courts and Judge Phillip Mackenzie sided with himn, granting the license. In response, new legislation was passed allowing the city to ignore the court’s ruling. When the law was finally repealed in 1969, it was not due to the racist implications but rather because it was considered discriminatory to women.

The WDM collection has a handful of items from Jow Tai and the Exchange Café. A steamer trunk that he used when moving to Saskatchewan from BC in 1919 is in storage at the WDM Corporate Office in Saskatoon.​

In addition to this, a handwritten book or journal that belonged to Jow Tai is in the WDM Corporate Office. In 2019, the book was translated, and it was determined this book contained an extensive family tree, including the villages where his ancestors had lived. Another artifact relating to the Exchange Café, is a menu that belonged to Jow Tai’s son, Sam. Sam worked at the café for a few years, as did all the Tai children. Starting at about six years of age, the children would help peel potatoes, sweep floors, wash dishes or serve customers. In 1947, the year Jow Tai’s wife Yee Leon moved her family to Moose Jaw, the café was open 24 hours a day, had a staff of around 60 people and would serve up to 2,500 people a day.

The stories of Jow Tai and Yee Clun are similar to the stories of many early Chinese immigrants to Canada. Coming in search of a better life for themselves and their families, they faced discrimination and hardship in many forms. Though their fight against the racist white women’s labour law was unsuccessful, their attempts to challenge these discriminatory norms are an important part of Saskatchewan’s history.